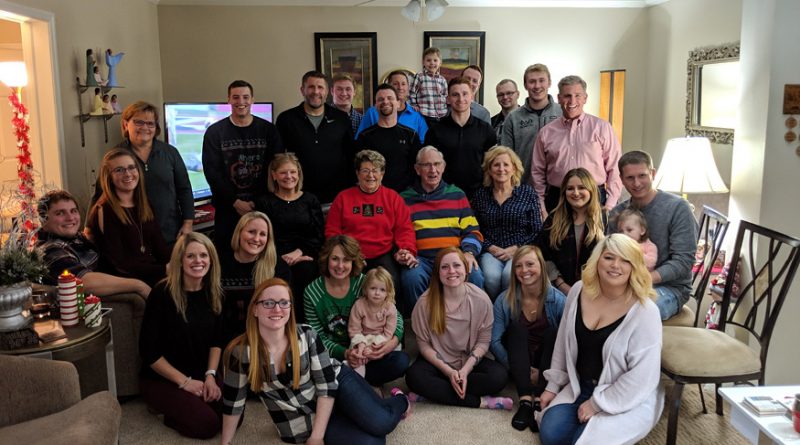 Around the Archdiocese Stewardship
May 3, 2019 Jill Kruse-Domeyer

Gift to go to Clarke students who are service oriented

DUBUQUE — Thanks to the generosity, and out-of-the-box thinking, of five siblings who wanted to come up with a meaningful gift idea for their parents, a new scholarship has been established at Clarke University in Dubuque that will benefit incoming first-year students for years to come.

The Dick and Dianne Heim Community Service Scholarship was created late last year by Dick and Dianne Heim’s children and their spouses — Richard and Anne Heim, Dave and Theresa Heim, Michelle (Heim) and Dean Shanahan, Timothy and Barb Heim, and Robert and Jennifer Heim — and their respective families.

The Heim siblings had wanted to give their parents a Christmas gift that was more consequential than the gift certificates they often wrapped up and placed under the tree for them. “We’ve struggled every year – ‘What do we get Mom and Dad for Christmas?’” reflected son Richard Heim. “My parents are not materialistic people, so we were looking for something that would be a lasting thing.”

After Richard heard about scholarship opportunities at Clarke from someone at the university, he reached out to learn more about the process of establishing one and shared the scholarship idea with his siblings, who all got on board.

The family, Richard said, chose to establish the scholarship at Clarke because his sister and his wife are alumnae of the Catholic university, and he also has a connection with the school through his godfather, who was once chair of Clarke’s board of trustees.

Richard and his siblings contributed money toward the establishment of the scholarship and can donate additional funds at any time. There is about $30,000 in the fund right now, while the goal, Richard said, is to reach $100,000. “Our intention is to have enough money in there to fund an incoming freshman each year,” he said.

They also must be from the city of Dubuque, which Richard said he and his siblings felt was important because of their family’s strong connections to the Dubuque community. Both of their parents are Dubuque natives and have lived there all their lives. Dick spent most of his career working at the Dubuque Packing Company, and Dianne, after her children were grown, became a realtor, helping people find homes in the local community. Though not all of their children still live in Dubuque today, all of them did marry fellow Dubuque natives, so the city holds a special place in all their hearts.

A final, and key, part of the scholarship criteria is that the potential recipient be someone who is service oriented. “My ­parents have been community servants within the Dubuque area,” Richard said. “They always give back to the community, so we felt that the freshman had to participate in some level of community service activities … .”

Since his retirement, Dick, 80, has volunteered his time helping with repairs and odd jobs at Shalom Spirituality Center in Dubuque. Seventy-eight-year-old Dianne volunteers with Catholic Charities of the Archdiocese of Dubuque’s Jail & Prison Ministry.  The couple, members of St. Joseph the Worker Parish in Dubuque, also regularly bring Communion to those in local nursing homes.

At their family Christmas in December, Dick and Dianne’s children presented them with a document that highlighted the scholarship’s criteria and the background of why it was established. Richard said it meant a lot to him and his siblings to be able to give this gift to their parents.

“It was a chance for us to establish something in their name that will go on well after they’re gone. It was pretty emotional to give that kind of gift to your parents,” remembered Richard. “When we gave it to them, I think all of us were crying about it.”

The Heim siblings were not the only ones that the gift meant a lot to, though. Dianne said that she and Dick were deeply impacted as well. “We were touched beyond words,” she said. “What an incredible gift. We have the most wonderful children.”

The family expects the first recipient of the Dick and Dianne Heim Community Service Scholarship to be selected later this year.

The Heim family is shown on Christmas 2018, when the Heim siblings surprised their parents with a scholarship in their name at Clarke University. Dick and Dianne Heim, shown in the center of the group, have five children, 13 grandchildren and three great-grandchildren. (Contributed photo)