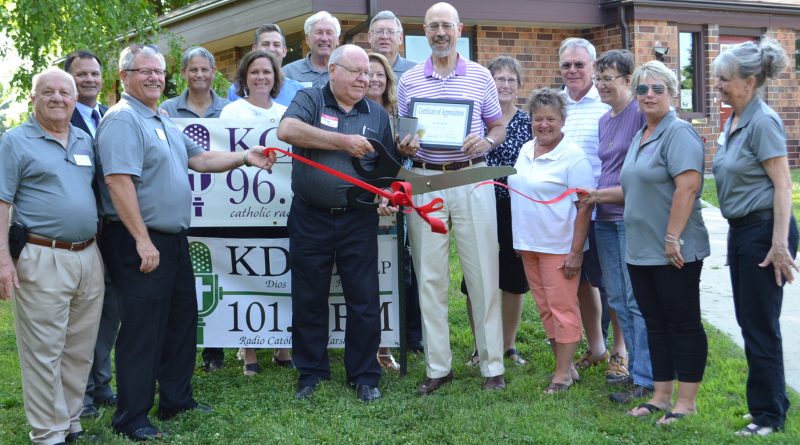 MARSHALLTOWN — The local Catholic radio stations in Marshalltown — KCRM 96.7 FM (English) and KDNH 101.5 FM (Spanish) — are back on the airwaves after being knocked off the air by the tornado on July 19, 2018.

After much searching for a place to relocate the stations, which had previously been located at 207 E Main St., the two stations were able to find a new home in the former St. Henry Parish Center located at 221 West Olive Street in Marshalltown. The transmitters and antennas are located at a tower site on Iowa Ave East.

“It took us awhile to find an available place because office space became hard to find after the tornado damaged so many buildings in town,” said Bob Dick, founder and CEO of Catholic Radio of Marshalltown. “Deacon Roger Polt, our general manager, did much of the leg work in searching out potential sites.”

In addition to identifying a new office space that was affordable, accessing a tower also presented some challenges for Catholic Radio of Marshalltown.

In spring 2019, Catholic Radio of Marshalltown got some much needed good news.

“This spring, as we learned of possible space opening up at the parish center, we began to consider using a separate tower site,” said Deacon Polt. “We decided that maybe we didn’t need to have our own tower and we learned of technology to send our signal from our studio to a tower via the internet. A nearby tower worked out and everything kind of fell into place.”

Once Catholic Radio of Marshalltown had its tower and studio locations lined up, it was time to start ordering equipment. “An insurance payment for equipment destroyed in the tornado helped with the purchase of most equipment,” said Dick. “Assembling of equipment, computer programming and other preparations took place earlier this month. When we tested the equipment and that first signal went out over the air, it was a huge sigh of relief.”

The stations were officially back in the air in July. Supporters worked hard to make that possible.

“We were back on the air to beat the one year deadline with the FCC. Volunteers LeRoy Jero and Bob Cook lent their engineering expertise to the whole process. Their expertise was invaluable,” Dick added.

Catholic Radio of Marshalltown, which was started in 2003, provides Catholic programming from EWTN Global Catholic Network and Relevant Radio to the Marshall County community on KCRM, 96.7 FM (English) and KDNH, 101.5 FM (Spanish) which started in 2015. In addition, KCRM rebroadcasts the Mass from St. Henry Catholic Church each Sunday at 9 p.m. and airs the locally produced “Central Iowa Catholics” program on Monday, Wednesday and Friday at 9 p.m.

Local announcements are also broadcast throughout the day.

“We hope to add more local programming on both stations as we go forward,” Deacon Polt said. “All of the talk, Q and A, devotional and discussion from the two Catholic networks is great, but we want to offer more local programming to be a greater part of the community.” Although the two stations are low ­power and limited in coverage to about 10 miles, an internet stream takes their signal around the world.

“We started that (broadcasting on the internet) right after the tornado, to give us some kind of on air presence when the tornado took us off the air,” said Dick. “The link can be found on our Facebook pages, KCRM 96.7 and KDNH 101.5, so be sure to like us on Facebook!”

“It’s great to have both stations back on the air!” said Father Alan Dietzenbach, pastor of St. Francis of Assisi Parish in Marshalltown.

In closing Dick commented, “We are so thankful for getting back to this point from a year ago. When I first arrived on the scene after the tornado at our old studios, it was pretty disheartening. So much that we had put in to building up Catholic Radio of Marshalltown to that point was gone. The tower with our antennas on the building next to us was nowhere to be found, the satellite dish was crushed like a pop can, and the studio ceiling had fallen in, leaving all the equipment covered with insulation and rainwater. It was a similar feeling to those folks that lost their home, quite a sense of loss. But we had the support of our listeners, sponsors and so many in the community, so we are very grateful to them for that support.”

Read previous Witness coverage of the 2018 tornado that affected Marshalltown at TheWitnessOnline.org. This article was to submitted The Witness by volunteers from KCRM and KDNH in Marshalltown.

Volunteers and supporters involved with KCRM and KDNH radio stations held a ribbon cutting in late July to celebrate the opening of their new office location at the building that was formerly the site of the St. Henry Parish Center in Marshalltown. Their former headquarters and tower was destroyed by the 2018 tornado that also damaged many homes and businesses in the city. (Contributed photo) 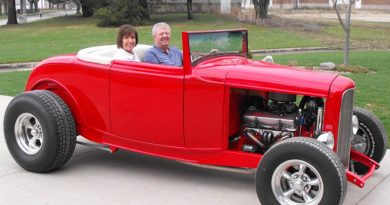 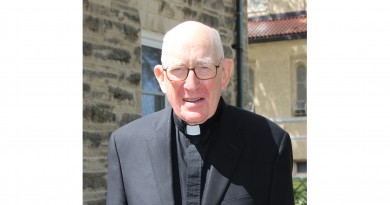 Fr. Donald Hawes is 2015 Fraternalist of the Year 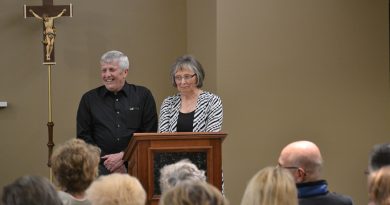 Finding strength in Christ, community even in tragedy