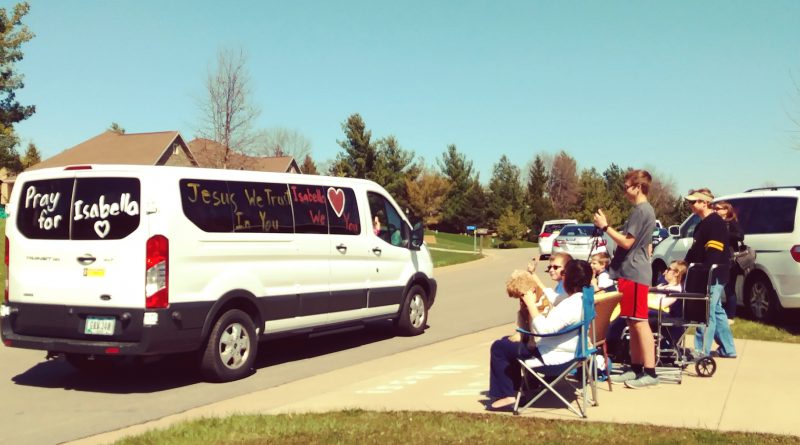 DUBUQUE — On April 18 in Dubuque, a gathering of friends and family arranged a private parade to show support for Isabella Auer, a 17-year-old girl suffer­ing from a rare brain tumor. The parade consisted of over 60 different cars, each one either decorated or with a person holding an encouraging poster out of the passenger window.

The event was mainly organized by family friends Kristine Dudzik and Ann Williams. According to Dudzik, she got the idea from a similar parade done by the teachers of Seton Catholic school, where her children attend, where the teaches drove past their students homes as a show of support during the Covid-19 pandemic.

“I can’t describe the joy I felt after this kind act of support during a scary and difficult time in our lives,” said Dudzik. “After hearing that Isabella’s symptoms were returning from her tumor, I wanted to extend that same outpouring of love we received to the Auer family, as they carry a difficult cross.”

The event was more than just a show of support, however, as it also served as the structure for a form of communal prayer for those participating. Gathering in the parking lot of Resurrection Parish, the participants began their motorized procession while praying along with the radio, as explained by Ann Williams.

“We recommended that people pray while traveling to the Auer home from our starting point, and during the parade. We specifically picked 3 p.m. for the parade time as it is the Hour of Mercy. The Divine Mercy Chaplet was broadcast on KCRD at that time, and many people prayed along with that.”

Isabella Auer herself was tired during the parade, but nonetheless enjoyed it and was able to express her appreciation, “I liked the parade. It was good. I was surprised at how many cars came through. It made my heart feel happy.”

Auer’s family wishes to thank everyone for their support during this period of hardship, from neighbors writing supportive chalk messages on their driveways to friends offering prayers, such as requests for Blessed Chiara Badano’s intercession for a miracle since Auer was first diagnosed. There is also an ongoing 24-hour prayer vigil in place for Auer, with people praying for her and her family around the clock. Auer’s friends cover a wide geographic area, so people are praying all over the country.

Dudzik summed up the general attitude behind the parade. “There are so many who love this family and dear Isabella and just want to show their love in some way.  With social distancing needing to be adhered to, this seemed to be the most prudent way to let Isabella know we love her and are praying for a miracle.”

Williams expressed a similar view, considering the informal event a success in demonstrating to the Auers how much they are loved. “It was so touching to see the outpouring of support. It was a tangible way to see how many lives Isabella and her family have affected. They are such a special family, with such deep faith. We are so blessed to know them.”

In spite of an uncertain future, Auer, her friends and family hold onto their strong faith in God’s plan and that good will be brought out of this suffering.

If you are interested in learning more about Auer, you can follow her on Caring Bridge at https://www.caringbridge.org/visit/isabellaauer.

The procession of vehicles, seen in the photo above, showed support for Isabella Auer. The event started in the parking lot of the Church of the Resurrection in Dubuque and went past Auer’s family home. Participants prayed for the teen as they drove. She is battling a brain tumor. (Contributed photo)

Editor’s Note: Isabella Auer died of her illness on April 28, 2020. May she rest in peace. 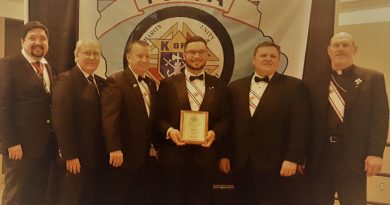 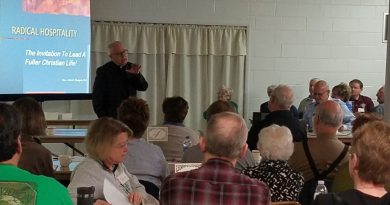 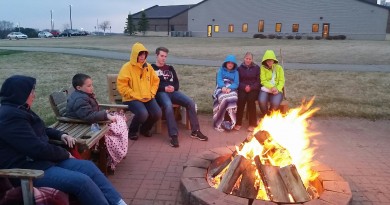