DUBUQUE — Gripping a small wooden cross as they stood in front of their peers in the Wahlert High School chapel, one by one each of the 18 candidates and many of the 15 adult team members of  Teens Encounter Christ (TEC) retreat #575 shared a moment from the three-day event where they felt closest to Jesus.

“I was in the chapel praying before my talk,” said Emily Jackson, a team member who returned to give a speech at the latest TEC in the archdiocese after completing her first one in 2017. “My heart was racing. It was bad. I felt another heartbeat, and it was a slow heartbeat. I just knew (it was Jesus).”

Jackson, now a Loras College student, was one of about 10 speakers that told the high school students, mostly seniors from Dubuque, Tama, Edgewood and other communities, about their journeys of faith over the three-day program.

During the time for reflections in the chapel, one of the last parts of the retreat before the closing Mass, a common theme emerged — we are not alone. We have each other, and, ultimately, Christ.

For Jackson, who focused her witness talk earlier that day on how a personal relationship with God helped her face the challenges with Type 1 diabetes and other  health issues, this truth that we are not alone keeps her involved in the retreats.

“I needed to be someone who could show them love and show them Christ,” said the 19-year-old Wahlert grad. “I told a story based on this paradox between love and pain, this desire to fight harder for Christ because of your struggle. Whatever brings you down, there’s a reason you can get back up. There is someone who can get you back up. We see a lot of pain today. I think people need to see there’s a way to overcome that.”

In 2018, TEC is celebrating its 50th anniversary in the archdiocese. Each retreat features the same core elements — talks on faith, an opportunity to pray and receive the sacraments, and of course, the chance to have fun and meet new people. All retreats have a number assigned to them, and since each gathering brings together different personalities, each one, including 575, is unique. Gabe Wigginton, one of the candidates, said that a Sunday volleyball game was a defining moment for the latest TEC.

“We were just having a blast,” recalled Wigginton, a Wahlert student. “I liked all the talks. It was a great group.  I think that the people who share their stories have really good stories and are really powerful.”

Jenna Michel, a Wahlert teacher,  served as director for the Nov. 10-13 retreat.

“I’m currently making a playlist for them to take away because they don’t have their phones, which is a blessing because we really want them to focus on God’s time,” said Michel, during a break on the final day. “I think the biggest difference from past generations is their ability to multitask, because life is so fast for them. They are constantly being bombarded by their phone, by the use of their computer … . With this group, they have had the best ability to slow down and to really listen with their hearts, not just their ears, and this group is a beautiful group of singers.”

Over the last half-century, TEC has had a major impact on the course of many lives. Such is the case with Julie Scmidt, the TEC program director for the archdiocese who served on the team of TEC 575.

The school counselor and youth minister from Bellevue attended her first retreat, TEC #389, at Marquette Catholic High School in 1996.

“(TEC) was a very influential weekend for me in my faith journey,” she said. “TEC is completely intertwined back and forth through my life. Without that TEC experience, I wouldn’t have become involved in ministry in college or continued ministry after college.”

Schmidt, a public school graduate, became familiar with Marquette through the retreat and later took her first job there. As TEC program director, she helps maintain continuity in the local TEC retreats based on a national standard.

“The overall set up of TEC is the same with a few minor adjustments,” she said.

Jim Kuhl, theology teacher and TEC coordinator at Wahlert, is a 40-year veteran of the retreats who believes passionately in their value for young people.

Although many participants have profound mountaintop experiences on their first TEC, this is not true for everyone.  Father Andy Upah, spiritual director for TEC #575, is an example of this. He attended his first retreat in Cedar Rapids as a high school senior.

“I had a head cold,” he recalled. “I felt miserable. There were some good things about it, but I didn’t connect with anybody really well.”

Despite his initial experience, Father Upah got much more out of coming back the following year, and then again in college, as a team member.

“I really enjoyed working the TECs after that,” he said. “I like helping, and I
really like being behind the scenes. There’s something about being a part of it but not having to speak in front of it, which is so ironic right now.”

Father Upah gave one of the talks during TEC 575, and also celebrated Mass and the sacrament of reconciliation.

“What I did hear a couple people say is how important confession and the communal reconciliation we did (was),” reflected the priest.

While taking a break from working on his homily for the final liturgy, Father Upah said he hoped the candidates would go home having a stronger relationship with God.

“They realize hopefully a lot of people are going through their own struggles with faith and their own struggles with family and friends and they’re not alone in it all,” he said. “Even though we have those relationships, those people are still prone to let us down because we still often love with a human love, but who won’t let us down is Jesus. If we have that strong relationship with our God, that’s what’s going to get us through.”

Mary Fruend, one the candidates, said she hoped to pass on some of the knowledge she gained from TEC to others who participate in Kairos, an upcoming retreat for juniors.

“I’m going to be leading a Kairos this year, and I wanted to strengthen my relationship with God and strengthen my faith before I did that just so I’ll be able to give the juniors a better experience,” she said. 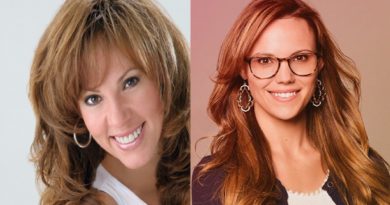 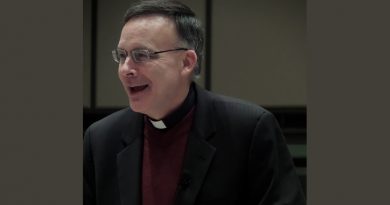