As rain and snow from the heavens

You visisted the land and watered it

The creation awaits with eagerness

The Parable of the Sower 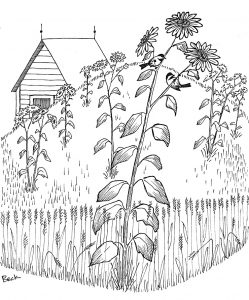 During this liturgical year featuring Matthew, the lectionary favors the dis­courses of Jesus over the narratives about him. Matthew built his narrative on Mark’s Gospel, his primary source, but he added five major speeches. Today we reach the third of these discourses, that of the Parables. The parables will be with us for a few weeks.

Matthew also added to the number of parables he found in Mark 4. Both Gospels, however, begin with the Parable of the Sower, which stands in the Gospel narrative as a primary representative of Jesus’ tradition of telling parables.

The Sower parable compares three unsuccessful attempts to sow seeds—failures due to hungry birds, rocky ground, or thorny overgrowth—with three more successful attempts, producing yields of “a hundred or sixty or thirtyfold.” While the primary lesson is the comparison, most of the attention is given to the different ways in which the sowing can fail.

In this case, as with a few other parables in this Gospel, we are given an allegorical interpretation along with the parable. There we learn the seed equates with the word, and the three failed attempts align with the dangers of the World, the Flesh, and the Devil, though not in that exact order. The birds represent “the evil one” who “comes and steals away what was sown in the heart.” The rocky ground represents the frail flesh, where the word has “no root and lasts only for a time.” And the thorns are “worldly anxiety and the lure of riches.”

It is likely that the allegory that builds upon the parable is a later development by the early Christian community. This can be seen in the slightly different points made by the parable and the allegory. The parable can stand alone, as other parables do. In this case, it makes a case for the failure of the word to reach everyone. One can imagine it being used to explain the failure of the disciples to convince everyone they encounter.

After all, the lesson goes, there are many different soils, and not all are receptive at any given time. There are many hearers of the word, but many different things are going on in different lives, and not everyone is ready. The disciples are enjoined not to obsess over their failures, for after all, there are also those cases of hundred, sixty, and thirtyfold. We might compare Jesus’ words to his disciples in John 4:36-38: “One sows and another reaps.”

In the allegory, however, the lesson shifts to a lesson that may have been important for the early church to learn, and that is catalogue of dangers to avoid in receiving the word. One can imagine the early tradition bringing out the risks of the World, the Flesh, and the Devil as things to be carefully avoided. In this case, the lesson for the preachers of the word is enlarged to include lessons for the hearers of the word.

But in addition to the initial utterance of the parable, and the later elaboration of it by allegory, we might discern a further level. As the “word,” the seed immediately brings to mind the teaching of Jesus, as well as that of his disciples, as we have just suggested. But in another register, it is the word of the Gospel itself that is indicated.

With that in mind, we notice that there are individuals in the Gospel story that illustrate the different dangers. Jesus com­pares Peter to Satan (Matt 16:23). In Gethsemane, Jesus scolds the sleepy apostles, “The spirit is willing, but the flesh is weak” (Matt 26:41). And riches impede both the rich young man (Matt 19:22) and Judas (Matt 26:15).

For reflection: Why would Jesus use parables in his teaching?

The understanding and compassion of Good Friday