SOLEMNITY OF THE BODY AND BLOOD OF CHRIST

A food unknown to your ancestors

With the best of wheat he fills you

We all partake of the one loaf

I am the living bread 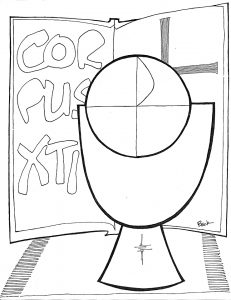 The biblical focus of the feast of Corpus Christi (to use its traditional title), changes from year to year. In Cycle A, where we are now, the coordinating theme is the bread. Next year, Cycle B, the emphasis will be on the cup. In the third year, the prayer will get the main attention.

The eucharistic Body of Christ under the form of bread is considered from different sides in the Scriptures for the day. The first reading, from Deuteronomy, focuses on the manna in the desert—an image that John’s Gospel also uses, though not in today’s selection.

There are many Old Testament references to the manna, so it causes one to ask what is particular about the passage chosen for today. The book of Deuteronomy presents itself as the final words of Moses, delivered as the wandering people arrive at the end of their journey, gazing across the Jordan into the Promised Land. He will not be going there himself, but he has some words of advice for those who will.

In the part from which today’s reading is taken, Moses is advising the people not to lose their faith once they become prosperous. They are to remember when times were difficult, during the sojourn in the desert, and how God preserved them by sending the manna, “a food unknown to your ancestors.” Faith is not something that only comes into play when we need help. It is for the land of milk and honey as well the desert. It acknowledges that wellbeing is a gift and not simply personal achievement.

Some will recognize a quote used by Jesus in his own desert temptation—“One does not live by bread alone, but by every word that comes forth from the mouth of God” (Matt 4:4). It adds to the meaning when we realize the passage quoted warns against abandoning God in times of prosperity. The time in the desert is to be kept in mind later, when the temptation toward personal assertion threatens to take over. Jesus knows Satan’s tricks.

The Gospel reading is from John’s “Bread of Life” discourse. We are toward the end of the chapter, where the language becomes very graphic and specific. The words “blood” and “flesh” enter the discussion. The word for eating is also very vivid, evoking the action of chewing.

When we realize that this Gospel does not present the bread and wine at its account of the Last Supper, but instead tells of the washing of feet, we may suspect that this passage takes the place of the missing eucharistic report. Raymond Brown thought as much, suspecting that it got transferred from John 13.

The word “flesh” is particularly interesting here. In most of the New Testament it has a negative connotation. See Galatians 5, for instance. And even in this chapter, we see it (6:63), along with an earlier instance (3:6). Apart from these, we have five instances of the word in this passage alone (6:51, 52, 53, 54, 55, 56), all apparently positive in meaning.

And this is the extent of John’s use of the word, except for one critical instance, which we all know. In 1:14 we have the familiar passage that describes the action of the Gospel as a whole: “And the Word became flesh and made his dwelling among us.” We need to read these passages in relation to one another. The “negative” flesh image suggests the “emptying” of kenosis, as in Philippians 2:6-11. The flesh and blood that is to be shared and eaten becomes the believer’s share in the Incarnation, also an “emptying” that leads to eventual glory.

For reflection: How would you rephrase the message of today’s Gospel?

Incarnation – God is with us

The art of slow living: when calligraphy becomes prayer