Naaman is cured of leprosy

The ends of the earth have seen

The word of God unchained

Ten lepers, on the way to Jerusalem 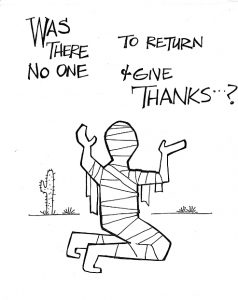 In the Sunday Scriptures, we’ve been on the road with Jesus and his disciples, heading toward Jerusalem, for a long time. It was on the 13th Sunday of Ordinary Time, in late July, that Luke told us Jesus had set his face toward Jeru­salem (9:51). Most of this time he has been involved in debates with the Pharisees, or instructions to the disciples. But now we have a break from the discussions and have some action. Jesus heals 10 lepers.

We are still in the area of Galilee and Samaria, which is something of a surprise, since Luke said back at the beginning of the journey that they were entering Samaria. But clearly he wants us to think about issues relating to the non-Jews as well as Jews. And today, Naaman the Syrian is the prominent example.

The lectionary’s choice of featuring Naaman, in the reading from 2 Kings, has a backstory. Luke has a special place for Naaman in his plan for the Gospel. This was seen in the mention of this Syrian military commander in the opening scene of Jesus’ ministry. In showing Jesus reading from the scroll of Isaiah in the Nazareth synagogue, Luke presents him as drawing from a biblical tradition that was open to the Gentile world. A key theme in the latter part of Isaiah is that of the “light to the Gentiles.”

Jesus followed that up by citing Elijah and his successor, Elisha (Luke 4:27). These examples of prophets going to the Gentile world beyond Judaism was presented as a model for Jesus’ own ministry. In addition, Naaman was a military commander. Though we have only a snippet of the fuller story today, that larger story shows that not only was Naaman a military commander of another nation, but that Israel was at war with them at the time! His story was guaranteed to provoke controversy.

Later Luke would continue the Gospel narrative with the story of the early years of the church, in Acts of the Apostles. Here he pictured the followers of Jesus bringing the message to the larger world. In Acts, Luke is concerned to show that the mission to the Gentiles is not stymied by Jewish food laws and other ritual demands.

The mention of ritual demands brings our attention to the other prominent theme of the readings. Naaman, like the 10 lepers of the Gospel, was also a leper. As with Gentiles, lepers were excluded from the religious rites of Judaism on account of their being ritually “unclean.” And one of the lepers was not Jewish, like Naaman. He was a Samaritan, viewed as not of pure Jewish heritage.

And at this point we come to the real emphasis in the stories. It is not so much on the outsider status, but on the response that their healing evokes in them. We noticed that the Naaman story for today is a small selection of a larger story. The part chosen for telling is precisely his response to being cleansed. He converts to believing in God Yahweh, deciding to build a shrine to the true God at his home in Damascus. We notice here the ancient belief that God was tied to the land in which he was honored. So Naaman takes enough of Israelite dirt home with him to construct a shrine in foreign Damascus.

And the story of the lepers also emphasizes the response. Of the nine verses in Luke’s story, four recount the action, and five are devoted to the response. The Samaritan returns to thank Jesus. Jesus notes that he is also giving thanks to God. Like Naaman.

For reflection: Three themes converge, leprosy, foreigners and thanksgiving. How would you explain their connection?

Up Jerusalem! Stand upon the heights

Faith the size of a mustard seed