Plotting of the Wicked

The Lord upholds my life

Where do wars come from!

The Twelve argue about status 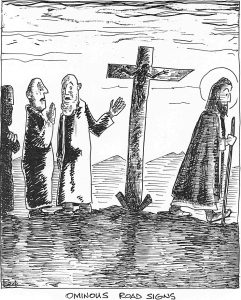 The Wisdom reading is one of many to which the New Testament appeals to make sense of the crucifixion of Jesus. The passage says that some persecute virtuous persons out of ill will. Sheer resentment. Their sick joke is that they are helping the Just One live his faith. They are only too happy to give him a chance to exercise his trust in God, by giving him a reason to do just that. Maybe his faith will save him — from them.

The Gospel reading is the second of the three “passion predictions” made by Jesus on his way to Jerusalem (Mark 8:31; 9:31; 10:32-34). In Mark, each of these three follows the same pattern. After Jesus announces the coming crisis in Jerusalem, disciples misunderstand him, which allows Jesus to follow up with teaching. In the first case it is Peter; in the third and last case, it is James and John. But the second of these is the text for today, and it involves all of the apostles, who are disputing their importance and rank among the roster of Twelve. In this case, the instruction that follows is extensive, and if bracketed by two similar sayings concerning “the first and the last” (9:35; 10:31). The implication is that this appeal to “servant discipleship” is the theme that informs the teachings that come between them.

I have long assumed that the reading from Wisdom was chosen by the editors of the lectionary for its implied reference to the passion prediction. As the gospel reading says today, “The Son of Man is to be handed over to men and they will kill him, and three days after his death the Son of Man will rise.” I think that this is probably the reason the reading from Wisdom was chosen for today.

However, another aspect caught my attention this time around. Perhaps the animus of the hostile speakers in the Wisdom reading is what directed my attention. In any case, I found myself focusing on the reaction of the Twelve. Not only did they misunderstand what Jesus was trying to do, focused on their own importance instead of servant discipleship, but they made that self-importance a cause of argument. Once they were inside the house, Jesus asked them, “What were you arguing about on the way?” But they remained silent.

But, as a matter of fact, this kind of anger and argumentativeness is present in all three instances of the passion predictions. After the first, Peter objects: “Then Peter took him aside and began to rebuke him. At this he turned around and, looking at his disciples, rebuked Peter and said, “Get behind me, Satan. You are thinking not as God does, but as human beings do” (Mark 8:32-33). They are having a heated difference of opinion, played out in front of everyone.

When James and John request seats to the left and right hand when Jesus comes into his kingdom, ignoring the servant implications of the third foreshadow-ing of what lies ahead, Jesus needs to explain things once more. But again we find an antagonistic response: “When the ten heard this, they became indignant at James and John” (10:41).

It is clear that as Jesus moves toward Jerusalem, the disciples cannot — or do not wish to — recognize the dark days ahead.

For reflection: Why does Mark report dissension among the Twelve?

The Ten Commandments of Mercy

Parable of the vineyard tenants