The covenant of Abraham

Hide not your face from me

Our citizenship is in heaven 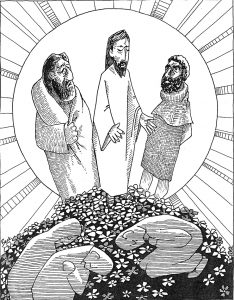 Today on the second Sunday of Lent the Scripture readings feature experiences of transcendence. The Transfiguration evokes the stories of Moses and Elijah on Mount Sinai, when clouds and fire attended the appearance of God. So it is that these two figures from the Old Testament join Jesus in an atmosphere of glory, to the consternation of Peter, James and John.

Luke’s account is like the other Gospels, with a few exceptions. This version speaks of the “exodus” Jesus will undertake in Jerusalem. It looks ahead to the trauma of the final days of Jesus and in that way acts as a reassurance. This would explain why it appears in the early days of Lent, as we look forward across the difficult times toward Holy Week and Easter.

The reading from Genesis also describes an unearthly experience. The covenant with Abraham, mentioned three times in Genesis (chapters 12, 15, 17), receives its fullest account here. The storage ceremony never fails to capture our attention. It seems that it recreates an ancient covenant ceremony. In Jeremiah 34:18, we find an offhand reference to such a ceremony, informing us that the contracting parties passing between the separated halves were symbolizing their willingness to experience the fate of the animals, should they fail to keep the sworn agreement.

Covenants were solemn agreements, though not always with this manner of ritual. They were exercised in the world of business or politics, much as we have signed documents. The Bible shows God using this human custom for religious purposes, with God occupying one side of the agreement, the human party on the other.

The covenant with Abraham stands as the model of one of two kinds of covenant in the Bible. The other is the covenant of Moses. All other covenants follow one or the other of these two models. They can be clearly distinguished by certain features.

Where the Abraham model pictures a contract between God and an individual, following the pattern typically exercised in the economic realm, the covenant of Moses shows a pact between God and a group, the Israelites. This reflects the world of political pacts, and it resembles examples found in ancient peace treaties.

There are other differences. While both kinds show God as one of the parties of the covenant agreement, and each model assumes obligations on both parts, they do not make both sides explicit. The Abraham model emphasizes God’s “obligations” in the covenant more than those of Abraham. In chapters 12, 15 and 17 of Genesis we find certain commitments on God’s part. There are basically three of these: God will give Abraham many descendants; God will give them the land through which he currently sojourns; and his name will be a blessing for future generations (Gen 12:1-3; 15:5, 15; 17:4-5, 8).

What Abraham must do is be faithful — something implied more than spelled out. Because the bulk of the obligations are God’s, this came to be known as “the promises to Abraham.”

On the other hand, the Moses covenant was between God and the people. Moses was primarily the facilitator. In this case, it was the human participants in the agreement who had the obligations spelled out. These were the commandments (Exodus 20) and the covenant code of law (Exodus 21-23 — but also Leviticus and Deuteronomy). God’s part in the treaty was largely implicit. In essence, he would be their God. Because of the political form of this covenant, it also implies that God would act as the unifying “king” for the 12 independent tribes. Because the people’s part is spelled out in this case, this covenant came to be known as the “Mosaic Law.”

For reflection: In Galatians 3, Paul argues the priority of the promises of Abraham over the law of Moses.

The martyrdom of inadequate self-expression

Taking a look at St. Therese of Lisieux’s ‘Little Way’