The sheep of his flock

The sheep hear my voice

The Fourth Sunday of Easter is sometimes known as Good Shepherd Sunday, since the Gospel reading each year is taken from the tenth chapter of John. This chapter contains John’s passages about the Shepherd, and is often thought of as the Good Shepherd chapter.

That designation implies a thematic unity in the chapter. While that might be true, it doesn’t entirely stand up under closer scrutiny, when we look at the underlying action. This year’s selection is rather brief, and it might be interesting to think about why it is, and related to this, how the passage fits into its biblical context. In the liturgical setting, we look at the selections themselves, out of context, and we neglect how they work for John and his Gospel. 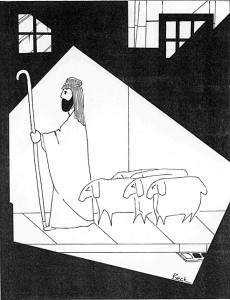 In the other two years of the three-fold annual cycle, the selections are John 10: 1-11 and 10:12-18. These are solid, somewhat more extensive, passages about the Good Shepherd. Typically they evoke pleasant mental images, not unlike Psalm 23 — “The Lord is My Shepherd; I shall not want.” For this reason, the tension implied by looking at the Gospel passages in context may offer some surprises.

John 10 ends a line of action that begins in John 7, which shows Jesus going up to the temple secretly for the feast of Tabernacles. During that chapter and the next, he engages in a fierce debate with the Jerusalem authorities. Chapter eight concludes with an attempt to stone him, though he manages to escape. Moving away from that scene, he encounters the Man Born Blind, in a drama that results with the man able to see, but Jesus’ opponents more blind than ever.

This episode continues directly into the lesson about the Good Shepherd, addressed to those authorities. In effect, it not only identifies Jesus as the Good Shepherd, but also names his opponents as unworthy shepherds, bad leaders. All this does not bode well for Jesus. The line of action, having begun in chapter seven, now concludes at 10:19-21, returning to the theme of blindness, and drawing matters to a temporary close.

Following that, in 10:22, we find ourselves at an entirely different time of the year. It is now the Feast of the Dedication of the Temple. This is what we today know as Hanukkah. While most of this part of the chapter depicts the heightening tension between Jesus and those who oppose him, the theme of the Shepherd comes up again, and that is today’s Gospel reading.

So what happens on the occasion of this winter feast? Confronted in the temple area, Jesus is pressed to honor his claim to be the Messiah. His response accuses them of disbelief. It takes the form of de­scribing them as not being of his flock, as we hear in today’s gospel.

As an immediate result of this short speech, they pick up stones for a second time to kill him. And again this does not work out, as he escapes with his disciples to a place on the other side of the Jordan River. There he will be when he receives word of the dying of Lazarus. He will re­turn, knowing that he will be trading his life for that of Lazarus. From there, it is a short trip to his Passion.

In sum, when we look at the Shepherd passages in context, what jumps out at us is the conflictual import of the passages. Not only are they a comfort for believers, but they present sharp challenges to those who would abuse their authority. The Shepherd image includes a sharp prophetic challenge that at the same time reveals the risk to the prophet himself. The price of prophecy can be high.

For reflection: What are some aspects of the Good Shepherd image that speak to you?

Catholic Church is journeying back to its nonviolent roots