THE EPIPHANY OF THE LORD

Rise up, Jerusalem, your light has come!

The kings shall offer gifts

The mystery made known to the Gentiles

The Magi come to Bethlehem 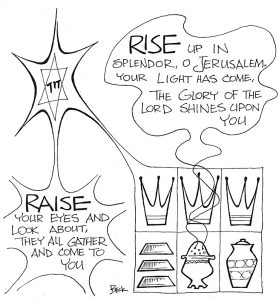 The story of the Magi doesn’t say that there were three of them. But it does say that they brought three gifts. And it only seems fair that there was a Wise Man for each gift. The gifts are traditional, and the Epiphany account from Matthew’s Gospel is grounded in Scripture.

The biblical figure looming behind the feast is King Solomon. He is the model for the vision of a proper king, in Psalm 72, our responsorial. And that psalm is implied in Matthew’s Magi account, seen in the word “homage,” among other indications. And it is to Solomon we can turn to find the backstory on the gifts. And for that, we need only remember the Queen of Sheba. Her story is told in I Kings 10, and its parallel account in 2 Chronicles 9.

She is, first all, the bearer of gifts of gold and spices, as well as precious jewels: “ The queen of Sheba, having heard a report of Solomon’s fame, came to test him with subtle questions. She arrived in Jerusalem with a very numerous retinue, and with camels bearing spices, a large amount of gold, and precious stones” (1 Kings 10:1).

Sheba was located in present-day Yemen, the currently war-torn nation at the southern end of the Arabian peninsula. In days past, it was an important conduit of precious spices and aromatic resins from India and other points east. The precious cargo was transported by caravan up the “Spice Road”—a passage that went up the west coast of the peninsula, to arrive at present-day Jordan. The ancient city of Petra, in the Arabah valley south of Israel, was the connecting point from which the goods were distributed throughout the Mediterranean Near East. The road itself was a braided path of trails, miles wide, which kept changing in order to outwit the many bandit gangs that lay in ambush, aiming to appropriate the treasure.

It is this tradition that is honored in Psalm 72, expanding the visitation of the Queen of Sheba to include all the nations, when the final age arrives. It would appear that the Magi were to be following the route of the Spice Road, and the Queen of Sheba, and for similar purposes—to learn, and give homage.

This much tells of gold and spices. But Matthew’s account specifies the spices, naming frankincense and myrrh. What is the story behind these?

The frankincense is most often mentioned in the book of Leviticus (2:1, 2, 15, 26; 6:8), as an ingredient in certain sacrificial offerings in the temple. In this regard, it is considered an appropriate offering to the divinity. It is also mentioned in Isaiah 60:6, the first reading for the feast of Epiphany. This vision of the gathering of nations to Jerusalem in the fullness of time, related to the famous passage on turning swords into plowshares (Isa 2:25), is also likely shaped by the same tradition as Psalm 72.

What about the myrrh? Here again we turn to Solomon—in this case, the Song of Songs, poetically attributed to Solomon. While references are scattered around the bible, there is a concentration of them here (1:13; 3:6; 4:6, 14; 5:1, 5, 13). Frankincense is also mentioned in many of these references. Here myrrh has a romantic aspect, due to its pleasant fragrance. For the same property, it seems, it was used for funerals and burials, and became associated with death. In Mark’s account of the crucifixion, Jesus is given a drink of wine mixed with myrrh (Mark 15:23).

There is some biblical support, then, for the popular interpretation of the three gifts—gold for royalty, frankincense for divinity, and myrrh for the mortal human being.

For reflection: What traditions about the gifts have your heard?

To whom will you give your allegiance?