THE EPIPHANY OF THE LORD

Jerusalem! Your light has come

The kings shall bring gifts

The Gentiles are coheirs

The coming of the Magi 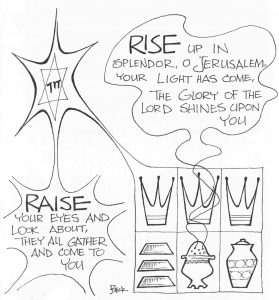 The readings for this feast are inevitable. They are the same every year, and so far no alternative choices have been proposed, as with other feasts. And frankly, it is difficult to imagine any other biblical texts than those of the day. Let me explain.

Naturally, on the feast of the Magi, we will have the biblical story of their coming, as given in Matthew 2:1-12. To appreciate this account, we need to recognize behind it the presence of Solomon, the original wise man.

The story of Solomon is told in 1 Kings and 2 Chronicles. Of particular interest is the story of the Queen of Sheba, in 1 Kings 10. She came from Sheba, today’s Yemen, up the ancient Spice Road along the west coast of the Arabian peninsula. It says she came to hear the wisdom of Solomon. On caravans of camels, she brought gifts of gold, precious stones, and a quantity of spices. But it is the Song of Solomon, what we call the Song of Songs, that speaks of frankincense and myrrh (3:6; 4:6, 14, etc.). This famous poem associates these spices with love and honor.

The passage from Isaiah 60 speaks of the coming day in which Israel will be recognized among the nations for its devotion to the one God. No longer will it be neglected as a forgotten nation. At that time nations and kings shall come to Jerusalem. The vision imagines darkness over the lands, and a light on Jerusalem. A rustling is heard, as the peoples move out of the darkness into the light of the holy city.

But again, Solomon is given reference. The kings, representing their peoples, are seen bringing the wealth of the nations. Caravans of camels and dromedaries carry gold and frankincense, proclaiming praises to the Lord. Much like the Queen of Sheba. The evangelist Matthew no doubt had Isaiah 60 in mind when he wrote about the Magi coming to Bethlehem.

Psalm 72, the response for the day, is also a Solomon psalm, as its first verse tells us—“Of Solomon.” The psalm is a hymn in praise of the ideal king, with Solomon as its model. Again we have the familiar motifs. Kings come bringing gifts, including gold from Sheba. A further note is that the kings will bow down before him. “All kings shall pay him homage, all nations shall serve him.” In the gospel story, the influence of Psalm 72 is seen in the emphasis on the homage, mentioned three times, offered the infant king.

We talk about the Three Kings. But the magi in Matthew’s story are wise men, not kings. Yet the evangelist has already set us on that route, making allusions to Solomon, to the passages about kings coming bearing gifts, paying “homage.” And we say there are three, because there are three kinds of gifts offered.

But what about the reading from Ephesians? That also belongs here, but on a different note. We sometimes call Epiphany the Christmas of the Gentiles, for the Magi represent the wider world beyond Judaism. But St. Paul was the missionary to the Gentiles. While this is a theme of his entire ministry, it is especially evident in the letter to the Ephesians. In all of his letters, Paul speaks of the great mystery of salvation brought about by the coming of the Christ.

Usually he is speaking in general terms of the restoration of an alienated human race, now brought back into union with God. But in Ephesians he takes a different direction, speaking of the great mystery as being specifically the inclusion of the Gentiles. That is the thrust of today’s reading.

For reflection: How do the readings chosen for today influence our celebration for the feast?