THE ASCENSION OF THE LORD 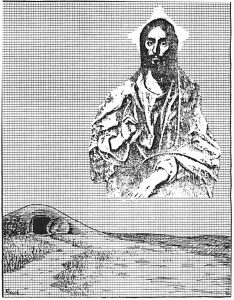 In some dioceses, like ours, the option to celebrate the feast of Ascension on the following Sunday is adopted. So let us take a look at the Ascension Scriptures.

Only two of the evangelists mention the Ascension. Luke does so quite explicitly, in Acts 1:1-11 and in his Gospel (Luke 24:5-53). These two references, by the same writer, can be confusing. The Gospel account doesn’t mention 40 days, but rather seems to infer that the Ascension happened on Easter, or the day following.

Meanwhile, John definitely seems to position the event on Easter. When Mary Magdalene encounters the risen Jesus in the garden, he says, “Do not hold on to me, because I have not yet ascended to the Father” (John 20:17). That evening, he appears to the disciples in the locked room and confers on them the Holy Spirit (20:22) — John’s account of the Pentecost experience.

So what are we to make of the 40 days? It appears that Luke is using the occasion to mark the conclusion of the time during which the risen Jesus appeared to his disciples. It is in many ways an arbitrary number, since we know that Christ appeared to Paul much later. But on the other hand, it does recognize that after awhile the Resurrection appearances no longer occurred.

In effect, those experiences were limited to the first generation of disciples, who then acted as witnesses to the Resurrection. Later on, when that generation began to pass on, their witness testimony began to be collected and written down and elaborated in the Gospel narratives.

But, of course, we know the event means more to the evangelists than a timeline, since in two of the three accounts it is missing. What we have in all cases is a sense of a mission accomplished, with Jesus returning to his Father. In a larger sense, then, one era in the drama of the Incarnation is ending, and another beginning, with the sending of the Spirit.

This liturgical year, however, features Matthew’s Gospel. And Matthew does not have an account of the Ascension. Instead, we have Matthew’s account of the final com­missioning of the apostles, sent out to the world.

“Go, therefore, and make disciples of all nations, baptizing them in the name of the Father, and of the Son, and of the Holy Spirit, teaching them to observe all that I have commanded you. And behold, I am with you always, until the end of the age.”

We recall that at the beginning of this Gospel, there was another commission. Joseph’s dream, in Matthew 1:18-25, spelled out the role for Jesus in the coming narrative: “You are to name him Jesus, for he will save his people from their sins.” We subsequently learn that “his people” refers to the “lost sheep of the house of Israel” (Matt 10:6; 15:24).

The early church saw the Messiah Jesus as the suffering servant of Second Isaiah, the prophet of the Babylonian exile. Matthew has reflected long and hard on the exilic reinterpretation of kingship in terms of servanthood. Twice in recounting Jesus’ mission to Galilee he quotes the servant songs of Second Isaiah (Matt 8:17; 12:18-21).

In the second of his four servant songs, Second Isaiah ends by redirecting the mission of the servant, from Israel to the nations among which they find themselves, and more:

It is too little, he says, for you to be my servant,

to raise up the tribes of Jacob,

and restore the survivors of Israel;

I will make you a light to the nations,

that my salvation may reach to the ends of the earth (Isa 40:6).

We might be justified in hearing in Matthew’s final verses an echo of this passage.

For reflection: Can you see why this Gospel text is appropriate for the day?

A house of prayer for all peoples

Why ‘What are the bishops doing about it?’ is the wrong question

The Francis effect on wedding planning