Keeping the commandments will save you

Not a wisdom of this age

Rereading the law of the Lord 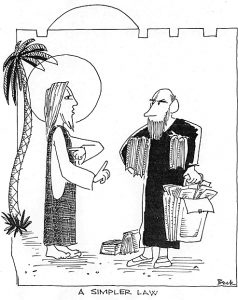 The story of Moses is an important precedent for Matthew in writing his Gospel. His Christmas story of the Holy Family traveling to Egypt and back again has echoes of the Old Testament.

The five books of Genesis through Deuteronomy were popularly thought to be written by Moses. First, the Genesis story of Joseph, another dreamer, tells of the descent to Egypt. And then, the book of Exodus tells of Moses leading the people of Israel back to the land.

It is also thought that Matthew’s division of the teaching of Jesus into five discourses—chapters 5-7, 10, 13, 18, 24-25—is a tribute to the five books of Moses. And now we are getting well into the first of these Matthean discourses, the Sermon on the Mount. We began with the beatitudes. This was followed by the sayings on salt and light. That much has an introductory feeling to it.

But now we are getting down to business. Chapter five gives us a series of five cases of reinterpreting the law of Moses. The procedure is to state the law (sometimes as it is used rather than as it is written), and then take it further. In a sense, it goes beyond law, since law is designed to regulate behavior, outward actions. But these five cases go deeper, to the hu­man drives that makes law necessary. The sermon mounts a searching inquiry to identify what in us requires regulation, and that’s the level at which it operates. This week is a good illustration.

Today’s reading in its full form is rather long. It takes the first three of the five instances. These concern the antisocial activities of killing, adultery and swearing. There is also a short addendum on divorce attached to the part about adultery. The shorter reading for today boils this pattern down to its essence and faithfully captures, I think, the meaning of the whole.

The pattern is a familiar one, hanging on the phrases, “You have heard that it was said, … but I say to you.” The third item, on false oaths, is a good example for demonstrating the procedure—as well as being a part that gets less discussion. It begins with the problem of a proliferation of swearing oaths. These are probably used for emphasis and no doubt are bothersome because of the liberal use of God’s name for trivial purposes that actually turn out to be lies in many cases.

The reinterpretation gets to the heart of the problem. The need to find a suitable oath derives from a pattern of fudging the truth, so that when the time comes when the truth is actually being expressed, the speaker needs a way to distinguish it from the other lies. So swearing on the divine is enlisted as a way of setting this particular instance apart. Of course a pattern of escalation complicates things, when this too turns out to be possibly compromising the full truth. And so the next time, something even stronger and more persuasive is needed.

In his reinterpretation, Jesus is saying that the problem goes back to failing to tell the truth in the first place. If a person is known for truth-telling, no artificial means of insisting on it would be necessary. It is lying, or misrepresenting the truth, that causes the need to swear an oath, and in the meantime, God’s name gets abused.

The other cases work in a similar way.

For reflection: Is Jesus asking too much of us in this part of the sermon?

A question about inheritance

The flavor of God’s energy

The most important question