David is king of all Israel

Rejoicing to the house of the Lord

Hymn to Christ the Firstborn

Jesus and the Good Thief 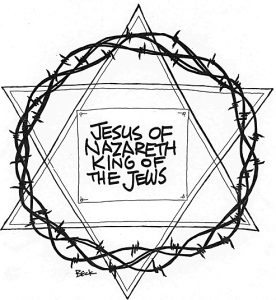 With the Feast of Christ the King we come to the end of the ordinary church year. We soon leave Luke behind and open the book to Matthew.

Special feasts differ from Sundays in that the feast determines the theme and the readings are selected to explore that theme, whereas on ordinary Sundays, the scriptures themselves set the theme. With that in mind, here’s something about each of the readings for today. It’s up to you to make the connections with Christ the King.

2 Samuel 5:1-3. The first reading concerns the time the elders of the 12 tribes came to David, petitioned him to become the king of all 12 of the tribes. He already was king of Judah (2 Sam 2:1-4). This was the first time there was a king of “All Israel.” (At one time, the late Fr. Jim Flanagan, Old Testament scholar and Dubuque priest, was the international authority on this era.)

The motif of the king as a “shepherd” was found throughout the ancient world and is here as well. This passage was one of the two quoted in Matthew 2:6, in response to the Magi’s arrival in Jerusalem.

Colossians 1:12-20. The second reading is a hymn that Paul borrowed for his own purposes. It portrays Christ as the triumphant king of the world, mounting his throne in glory. It has two balanced stanzas, with the first focusing on creation (vv. 15-17) and the second on salvation (vv. 18-20). In the first, Christ is the firstborn of all creation. In the second, he is the firstborn from the dead. Paul saw the resurrection of the body as a new creation, a social reality in which justice would rule, restoring what God had intended in the first place, but we ruined by the alienation of sin. In a sense, then, Christ was the first of the former and the new creation.

Luke 23:35-43. This is Luke’s account of the crucifixion of Jesus, with the story of the good thief, found only in this Gospel. In his telling of the story, Luke puts emphasis on the mocking of Jesus. Only Luke begins the mockery even before Jesus’ trial (Lk 22:62-65). Only Luke tells of Herod Antipas’s involvement, with an­other mocking scene (Lk 23:11). And now, at the crucifixion, we have a mounting tension as the taunting comes closer—from the leaders, to the soldiers, to one of the thieve crucified alongside Jesus.

There is certainly some irony in depicting Jesus as king at the crucifixion, with the cross as his throne. And there is a similar degree of incongruity to select that as the reading for the Sunday of Christ the King. It would seem to act as a counteractive influence to any tendency to celebrate the feast in a spirit of triumphalism. But then we are left to wonder, how can the crucifixion be the narrative chosen to celebrate kingship?

In each case, the subject of their taunting concerns kingship. “Messiah” means “anointed one,” and in Israel’s traditions this referred to the king in the line of David. But at the end, the other thief, the good one, asks, “Jesus, remember me when you come into your kingdom” (23:42).

The readings look at different aspects of the kingship. David represents the traditional kingship over Israel. The hymn from Colossians speaks to the exalted kingship of Christ in glory. The Gospel speaks to the humiliation of Jesus and the paradox of the cross as the throne of the king. Of course, that title is on the cross: “This is the King of the Jews” (23:38).

For reflection: How do you think each of these has something to say to the feast?

Whoever is not against us is for us