This is the day the Lord has made

Seated at the right hand of God

Mary Magdalen comes to the tomb 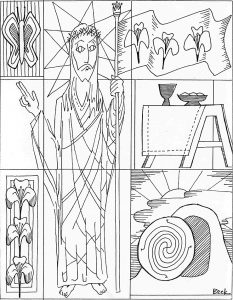 On special feasts the editors of the lectionary have selected readings which they deem fit for the feast. Sometimes it is worthwhile to investigate why. Since this is the case with Easter, let us take a look.

Peter’s speech in the first reading is the last and fullest of the speeches he gives in Acts. See also 2:22-36; 3:12-19; 4:10-12; and 5:30-32. It also makes an appearance in the Emmaus story, in Luke 24:19-27. It has the form of a list of events, along with some added notes. In its fullest form, which varies in the way it says it, these are the parts: a) Jesus of Nazareth, b) was baptized by John, c) did works and wonders, d) was crucified, e) was raised by God, f) all according to the Scriptures and g) we are the witnesses. Usually there is a recommended response, such as “Repent, and be baptized.” In its shortest form, it has just the basics — death, resurrection, the support of the Scriptures and the mention of witnesses. In this short form it also appears in 1 Corinthian 15:3-9, part of Paul’s classic statement on resurrection. This tells us that the main function of the speech is witness to the resurrection — hence, Easter. In fact, it probably echoes an early credal formula concerning the resurrection of Jesus, commonly called the kerygma, or “proclamation.”

Psalm 118 is a thanksgiving hymn that was sung in procession into the temple. It finds a place in the Gospels as the chant sung as Jesus entered Jerusalem in the triumphal entry. “Hosanna” comes from there. It appears a second time after Jesus is in Jerusalem, when he tells the parable of the vineyard tenants who kill the messengers and then then son of the owner. The line about the rejected stone that has become the cornerstone is from this psalm. Originally, the stone represented the nation ignored among nations, Israel. As used today, it serves as an expression of joy that the crucified has been raised.

Paul’s writings are represented by two examples, as the editors have added an alternative for the second reading. The first option, from Colossians 3:1-4, expresses the victory of the risen Christ, now seated at the right hand of God. Paul’s belief is that those in the Christian community are already in some way sharing in that risen life. This is the basis for his teaching in I Corinthians 15, mentioned above, that we will rise with Christ.

The second option is from 1 Corinthians 5:6-8. It is an unexpected choice, given the context of Paul’s criticism of unredeemed behavior of some of the Corinthian community. He is objecting to the practice of frequenting prostitutes. But it is the argument that he makes that accounts for its presence in the liturgy today. With an implied allusion to the Passover Seder, he says that they should be rid of all the old yeast of malice and wickedness and become unleavened, the unleavened bread of sincerity and truth. For Christ our Passover has been sacrificed.

The Gospel story for Easter day, is from John. The other Gospel accounts, depending upon which year it is, are heard the night before during the Vigil. John’s account is dramatic. As dawn appears in the sky on Easter morning, the resurrection of Jesus is discovered, and then more fully realized. Mary Magdalen, as with all the Gospels, is the first to discover and announce the empty tomb and risen Christ. Then Peter runs to the tomb, looking inside. And finally, the beloved disci­ple, who accompanies him, looks in and reports the situation to us.

For reflection: In the liturgy we enter into the drama, brought along by the witnesses.