In praise of humility

You have made your home for the poor

Not Sinai but the heavenly Zion 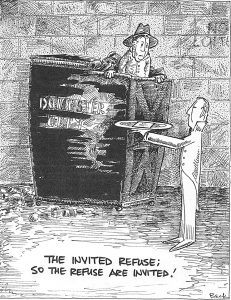 Humility is a biblical virtue. In the Old Testament, the theme of the “anawim” (Zeph 2:3) refers to the humble poor. The virtue appears repeatedly in the psalms, as well as the prophets (Micah 6:8). Today’s reading from Sirach sums up the feeling. Meanwhile, the psalm points to God’s covenant protection of the humble, typified by the widow and the orphan, the stranger in the land, and the poor neighbor (see Ex 22:20-16). Of course, that doesn’t mean that everyone adopted humility as a life model. Otherwise the prophets wouldn’t need to insist upon it.

With that in mind, we turn to the Gospel of Luke. This evangelist is writing for gentiles, non-Jewish people attracted to the biblical religion. These are people raised in the Roman Empire, with its cultural roots in the classical Greek world. It was a world in which warrior-inspired values of valor and honor were paramount. The objective was to gain glory before your peers. That defined the successful life. Of course, this applied only to the small minority of elites — the honestiores, as compared with the common majority of people, the humiliores.

One of Luke’s tasks in his Gospel, and its companion piece, the Acts of the Apostles, was to confront this set of values with another — that of Christian humility. It was part of Jesus’ program of promoting the poor and humble to the status of full human beings, as shown in Mary’s “Magnificat” (Luke 1:46-55). In service of that program, Luke introduces a series of figures who experience conversion. Paul’s is the most famous of these (Acts 9, 22, 26), but there are others.

Today, he tells the story of a banquet at the home of a leading Pharisee. The event unfolds in three steps. First, Jesus addresses the guests. They are heading toward the highest places at table. Jesus advises that they go farther down. It is better to be rewarded by being asked to move up higher than to be humiliated by being asked to go lower. “For every one who exalts himself will be humbled, but the one who humbles himself will be exalted.” He appeals to their self-interest in order to move them beyond self-interest.

After this, Jesus addresses the host. When you invite friends to a dinner, don’t invite those you know and those to whom you are related. They will invite you back in turn, and it ends there. Instead, “when you hold a banquet, invite the poor, the crippled, the lame, the blind.” They cannot pay you back in kind, and so your reward will be given “at the resurrection of the righteous.” The point is that reward is not to be your motivation in the first place.

There is a third step, not included in today’s selection — the parable of the great feast. This also appears in Matthew’s Gospel. However, Luke’s account is different from Matthew’s.

The parable tells the tale of a host whose dinner guests refused for one reason or another. In response, he invited others. The first goes out to the streets and alleys of the town, to invite “the poor and the crippled, the blind and the lame.” This repeats a key line of the previous advice to the host, in today’s reading (Luke 14:13, 21). But, since there is still room, he sends his servant outside the city walls to the highways and hedgerows, for those to “come in that my home may be filled.” It is with this second set of invitations beyond the city limits that Luke’s account differs. He is thinking about his non-Jewish readers, also invited to the feast.

For reflection: The virtue of humility seems as peculiar to our culture as it was to the ancient Romans.

The power of prayer and ritual inside our helplessness