You duped me, Lord

My soul thirsts for you, O Lord

Offer your bodies as a living sacrifice 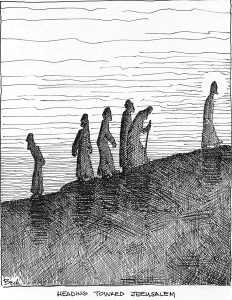 A case can be made that any permanent commitment is actually a series of recommitments made in the face of changing circumstances. That is true of marriage as it is of faith allegiance. The readings today explore this territory.

Jeremiah’s almost blasphemous outcry against God—“you duped me, O Lord!”—is among the most audacious of his “confessions.” This is the name that tradition has given to his outbursts of protest against the mission to which God has called him. Today’s passage needs to be read in the context of his call, in Jer 1:4-10.

He was reluctant at the time, aware of the difficulties that lay ahead. He was not wrong. But God assured him at the time. “Do not be terrified on account of them, … They will fight against you, but not prevail over you, for I am with you to deliver you—oracle of the Lord” (Jer 1:17-19).

But now he protests. He is a constant object of ridicule. In response, he attempts to keep silent, but the bottled-up truth will not allow him to stay silent: “But then it becomes like fire burning in my heart, imprisoned in my bones; I grow weary holding it in, I cannot endure it.”

In the Gospel, we have just heard that Peter, having acclaimed Jesus as the Messiah, is named as the rock upon which the church is built, the one with the keys to the kingdom. And now this. Jesus announces that he is to go to Jerusalem, where he will be taken prisoner and killed. However, on the third day he will be raised.

Peter will have none of this. This is not what Israel expected of the Messiah—the Messiah that Peter just now proclaimed. This is entirely wrong, and dangerous as well. Not only is this awkward turn of events not proper to the Messiah, but there is the likelihood that Jesus expects his followers to continue with him down this unfortunate path.

That turns out to be the case. After Peter’s protest, Jesus responds: “Whoever wishes to come after me must deny himself, take up his cross, and follow me.” For Peter, this is as bad as he expected. Back at the beginning, we heard Jesus call his disciples. “He said to them, ‘Come after me, and I will make you fishers of men’” (Matt 4:19). They left everything and followed him. The commitment was absolute.

But now things have taken a strange turn. Now he hears Jesus speaking words about a cross and denying oneself. These were not part of the original deal. Yes, the disciples had committed totally, but nothing was said about the cross at that time. Nothing about following a Messiah who speaks of suffering and dying.

It is hard not to think about these words in connection with Peter’s later story. We know that when the time came to take up the cross, when Jesus was in the house of the high priests, Peter was out in the courtyard. Yes, he was denying, but it was not self-denial. He was denying he knew the person inside, the Galilean, Jesus of Nazareth.

As with Jeremiah, the commitment of discipleship has taken him places he never expected. If he had known earlier … But then, the entire purpose of commitment is to pledge against an unknown future, with all the hidden surprises it holds in store.

In today’s second reading, Paul advises the Romans to be transformed. We might expect that the transformation often comes from within the terms of the promises once made, but now made anew in thoroughly unexpected circumstances.

For reflection: Have you had the experience of recommitment to terms you never expected?

Love — A projection and a reality