Conformed to the image of his Son

A treasure, a pearl, a net thrown in the sea 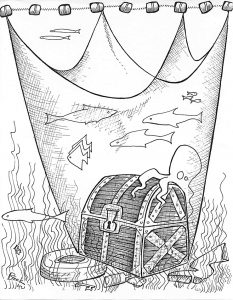 Two things for which Solomon was known were his wisdom and his wealth. In the story about his dream, the two are set at odds. Which is first? Which rules the king? In the choice of wisdom, we see that this is a wisdom based on faith in the God who sustains him. It is a wisdom that makes this the ultimate priority.

This competition between treasure and truth carries over into the parables for today. Matthew alone gives us the parables of the treasure, the pearl and the net. In the parables we get a sense of what the world of wealth looks like for those shut out from that world. Commentators on biblical times speak of a vast gap sep­arating the wealthy few from the rest. The common lot was to be poor. Commentators on today’s world point to an increasing gap of a similar kind. Though less extreme than that of biblical times, today we know it is not inevitable. Then, they did not.

There were laws about dealing with found treasure in the land of Israel, for it was something that happened now and again. The Levant, the coastal region of which Israel is a part, is squeezed between the Mediterranean on one side and the Arabian Desert on the other. It forms a narrow corridor of passage between the two great civilizations of the ancient world, Egypt and Mesopotamia. Armies from one side or the other would pass through here, and armies lived on their spoils. If you were poor, you suffered. If you were not, you played poor. When armies approached, you hid your valuables, burying them on your land. If you survived, you dug them up again. If you did not … well, there were laws dictating how to handle a treasure found later. One option is that given in the parable. Buy that land and all that is on it.

In terms of the choices given in the Solo­mon story, the treasure parable teaches a kindred lesson. The kingdom of God surpasses all competition. It is the true treasure. The story of the great pearl aligns with this, forming a paired set. But the point is now driven home further. The pearl merchant sells all and purchases the ultimate gem. But what then happens to his business? He has let that go—for the greater good of the kingdom.

The net parable is among those in this chapter of Matthew’s Gospel that end with a troublesome warning, concerning gnashing teeth and the fiery furnace. Much has been written about this rather violent image regarding God, who elsewhere is presented as nonviolent (Matt 5:38). But this can be seen as an insistence that justice is to be referred to God, who in the end will see that justice is done. This builds on the previous parable of the weeds and wheat, where the servants are explicitly instructed not to take that decision upon themselves (Matt 13:29).

In the present context, the contrast set out by the Solomon story, and continued in the parables of treasure and pearl, might find a resolution. In today’s world, the enigma concerning which value rules, faith or fortune, is a matter of debate. Though the faithful would like a definitive judgment validating their life choice, none is available yet. Not to worry. That will come.

The conclusion of the Gospel selection provides a final word on the theme. “Every scribe instructed in the kingdom of heaven is like the head of a household who brings from his storeroom both the new and the old.” The wise scribe of the kingdom (including Matthew?) possesses the true treasure in his storeroom.

For reflection: How is faith the true treasure?

You have a home for the poor