If Christ is not raised … 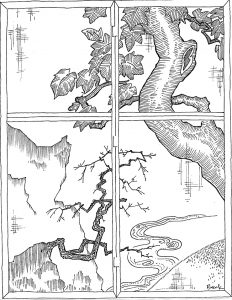 The response psalm for today is the first one in the Psalter. While the psalm usually doesn’t get much attention in this space, today is different. The reading it responds to is very similar, almost another version of the same poem.

The psalm in praise of wisdom was chosen to be the first as it was considered to provide a good introduction to the entire book. It consists of two parts, with the first praising the virtuous person, who is compared to a tree planted near streams of water. The second part takes an opposite position concerning the wicked person, who is compared to chaff driven by the wind. The contrast of the just and the wicked is standard wisdom language. But here it is made memorable by the two images.

The poem from Jeremiah 17 also is a wisdom psalm praising the just person. But the contrast is between those who trust in human endeavor only versus those who place their trust in God. Again the good and the bad are compared in the two distinct parts of the poem. But this time it begins with the negative, with an image of a bush in the desert, in a lava waste. Then we hear about the one who trusts in God being like a tree planted near streams of water. Very similar to the psalm, and yet different. Strong images always are welcome in the readings.

The New Testament readings will feature the 15th chapter of 1 Corinthians from now until Lent, which is rather late this year. First Corinthians 15 is Paul’s classic statement on resurrection, which concludes his letter. Today’s selection is brief, but it makes the case for the centrality of the doctrine of resurrection in Christianity — for “if Christ has not been raised, your faith is vain.” Last week’s passage from 1 Corinthians 3-11 began this chapter with an appeal to the witnesses encountered by the risen Christ. That passage also finds a similar statement in the proclamations of Peter in the early chapters of Acts. There too the witness to the Resurrection is pivotal to the entire message.

The Gospel for today gives us Luke’s version of the beatitudes, which in his case also includes woes. We have come to this evangelist’s version of the programmatic sermon of Jesus. Matthew has the Sermon on the Mount, three chapters long (Matt 5-7). Luke locates the sermon on a level place. And it is less than a chapter long.

Not only does Luke’s version match beatitudes with woes, he also makes it more personal and direct. Rather than “Blessed are the poor in spirit,” we have “Blessed are you who are poor.” Second person plural; not third person, and generalized. And after the poor, the hungry, the weeping and the despised are addressed, the speech turns to the contrasting set, with woes — the rich, the satisfied, the laughing, the well-considered. Luke presents a stark reversal of fortunes for both. The sharp contrasts suggest why the lectionary editors chose passages from Jeremiah and Psalm 1 for today’s liturgy.

But not only does it mention both the good and bad, but also the sharp reversal for each. This kind of reversal is not unusual in Luke. We remember the story of the Rich Man and Lazarus, where a similar reversal of fortunes is given to the pair of them (Luke 16:22).

And one cannot forget the Magnificat, Mary’s song in Luke 1. She does not mince words. Here too we hear about an abrupt change of circumstances.

“He has thrown down the rulers from their thrones

but lifted up the lowly.

The hungry he has filled with good things;

the rich he has sent away empty.”

For reflection: The passages today seem harsh. Is this homiletic rhetoric?

I will praise you, you have rescued me

I am meek and humble of heart