A warning to the priests

Lord, my heart is not proud 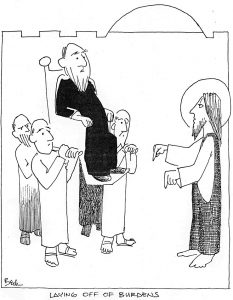 Priests and religious are fallible human beings like the rest of us. And yet, we feel a special pain in their times of failure, when they abandon or betray the calling that they have followed. More so, it seems, than with other walks of life. Is this not because they represent the realm of the holy in a particular way—and further, presume to do so as “professionals”? We are deeply disturbed. And so we find ourselves applying the term, so easily brandished today, of “hypocrite.”

It is this particular problem, apparently not a new one, that the texts for this Sunday examine. The reading from Malachi stands in judgment on the priests of the second temple. We know where to position this prophet in history because he is concerned about the tribute owed to the governor. This tells us that the David kingship was no longer in place. Therefore, his attention to the manner of worship must refer to the second temple, after their return from Babylonian exile.

His particular criticism, skipped over in the selection given us, concerns the quality of their offerings. The prophet accuses them of choosing for the sacrifices only the feeblest of the flocks, rather than the finest. In effect, they were culling the herds by offering the sick and lame animals they want to get rid of anyway. The prophet does not accept this. He compares the practice to paying the governor with inferior goods. So it should be with God. Hence the opening line: “A great King am I, says the LORD of hosts.” If the Persian governor would expect the best, even more so for the true king of the world, the Lord God.

The liturgical selection for today focuses on the fact of their failure more than the particulars. They have failed in their instruction, leading the faithful astray, voiding the covenant. Their blessing becomes a curse.

The Gospel reading from Matthew shows Jesus calling judgment upon the scribes and Pharisees, shortly to be named “hypocrites.” His accusation is that their practice does not match their preaching. His examples include placing burdens on the lives of people without helping them manage that burden. They like display of their position, embellishing their outfits. They also love to take places of honor at public gatherings—banquets and synagogues. The last charge prompts some startling recommendations. The titles “rabbi,” “father” and “master” are to be avoided. These are reserved for God and Christ. This echoes Malachi today: “Have we not all the one father?”

All of this concludes with the general principle behind the remarks. “The greatest among you must be your servant. Whoever exalts himself will be humbled; but whoever humbles himself will be exalted.” What should distinguish the faith leader is the model of a servant.

Against these negative assessments, the second reading from Thessalonians shows Paul presenting himself as an example of such. He compares himself to a nursing mother. His concern is for their wellbeing. He is conscious of his role of personally imaging the Gospel, as well as preaching it. He reminds them how he not only shared the Gospel with them, but also worked alongside them, day and night, “in order not to burden any of you.”

So here is that word, “burden,” again. For Paul, the minister that proves a burden is the opposite of an apostle, the inverse of the servant. For Jesus, the laying on of burdens disqualifies those who have assumed the chair of Moses.

What is at stake is the message of the God who cares for us and would make that known. The face of God is to be revealed, not obscured.

For reflection: What echoes of these Scriptures do we find today?

Have faith, Jesus heals us of our sins