Lord, I am your servant

If God is for us, who is against?

The transfiguration of Jesus

This Lent, the Old Testament passages take us through a tour of arks and covenants. In the first three Sundays, we hear about Noah, Abraham and Moses, in that order.

One suspects that the lectionary editors are echoing the priestly author’s theology in this selection. The hypothetical writer (or writers) we call “the priestly author” is one of the basic sources for the Pentateuch. In the traditional view, this writing was incorporated, along with the sources we call the Yahwist, the Elohist and the Deuteronomist, now woven together in a consecutive account that serves as the first five books of the Bible—the Pentateuch.

Each source has its distinct tone, emphasis and theology, and the different strands can still be separated, to some extent. The priestly source includes among its theological themes its own series of covenants—those of Noah, Abraham and Moses. (Hence my suspicion that it lies behind the choices made for this Lent.)

The Noah covenant concerns the first order, that of the cosmos. In the beginning (Gen 1), God established the orders of creation. After the flood (Gen 8-9), God reasserts order and enters into a covenant with Noah ensuring an enduring order. The sign of the Noah covenant is the bow in the clouds. This was last week in the liturgy.

The Abraham covenant concern the second order, that of humanity. In the beginning, humanity is created in God’s image (Gen 1). But after the fall, God goes unknown for many years. However, God re-establishes a relationship with Abraham. That relationship is secured with the covenant of Abraham (Gen 17). The sign of this covenant is circumcision. Abraham’s covenant is featured this week, by way of being endangered in the sacrifice of Isaac.

The Moses covenant establishes, for the priestly writers, the third order, that of the cult. On the seventh day of creation, God rested. But it was on Mt. Sinai, with the Moses covenant, that the temple cult received a complete ordering of cultic periods, personnel and sacred objects. Next week we will hear about the covenant of Moses.

The priestly author is just one voice in the Old Testament, and there are other theologies of covenant found there. But this voice has been influential.

Today’s reading features one incident related to the covenant of Abraham. In the Jewish tradition it is called the Akedah, the binding (of Isaac). We tend to call it the sacrifice of Isaac, although it is important that he is not actually sacrificed. But because he is asked by God to make that sacrifice, we find it a troublesome story.

It may have begun as a dramatized teaching that God does not want human sacrifices, but rather would prefer a substitute, such as a ram. However that may be, it has become a classic theological point of debate, and even meditation.

In the Jewish tradition, the Akedah is listed as the last and 10th trial of Abraham. The trial is specifically in the tension it creates concerning the covenant with Abraham. At that time, God promised that Abraham would be the inheritor of the land in which he sojourned, and he would have numerous descendants. But how can that be, if he sacrifices his son? And how can God have promised that and then demand this?

We might see other problems here, such as what seems a shocking disregard of the value of human life. But that might be part of the story’s value. The Danish philosopher Søren Kierkegaard has famously used the story to pose a question about the tension between ethical behavior, which would seem to prohibit such a sacrifice, and trust in God, who is absolute and transcendent.

For reflection: Does religious faith precede ethics when they seem to conflict? Or is it the other way? 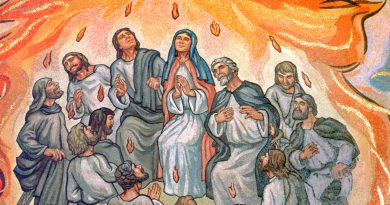 Reflecting on a Pentecost experience