THE MASS OF EASTER DAY

Let us rejoice and be glad

Your life is hidden with Christ

A little yeast leavens all

Mary Magdalen at the tomb

He has been raised; he is not here 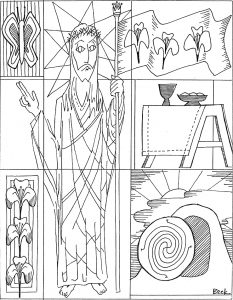 Increasingly, the lectionary has been providing alternative readings for feasts that have the same set of Scripture readings each year. This is true of Easter Sunday. I thought it might be interesting to discuss the different Easter Gospels that are options for the day. John’s account has been the traditional reading for the day, but now we can choose to read from Mark or Luke. How would they differ?

There are two kinds of Easter story—empty tomb stories and Resurrection appearance stories. The first kind is associated with the women, especially Mary Magdalen. The second features the men, especially the Twelve, and usually takes place in the upper room where they are sequestered. The selections from Mark and John are of the first kind; that of Luke is the second.

Mark’s Gospel was written first, and his account of the empty tomb is the model for the others. There is a longer ending for Mark, describing the resurrection appearance of the risen Christ, but it was not part of the original Gospel. In fact, different early manuscripts have at least three different versions of extended endings, suggesting that early transcribers of the Gospel felt the Mark account was unfinished without such an ending and supplied one.

In fact, Mark’s original ending does seem incomplete, a feeling Mark seems to have intended, implying that the risen Christ was still among them. Today’s selection omits the final verse eight, giving some sense of closure.

While Matthew and Luke stick fairly close to Mark’s account, John develops the story in his own manner. Today’s story of Mary Magdalen discovering the open tomb is distinctly Johannine in its dramatic development. It makes us aware of the day dawning and growing brighter in sync with the disciples’ growing awareness of the Resurrection.

John also tells the story of Mary in the garden, looking for the body of Jesus, and encountering the risen Christ unexpectedly. All the tomb stories feature Mary, but this confirms her role as the initial Easter witness. It is an appearance story that precedes the account of the Twelve in the locked room, which takes place that evening.

Luke’s empty tomb story is not an option for Easter. Instead, his classic Resurrection appearance story is suggested. The Emmaus story is the most elaborate of the appearance accounts. There are features worth noticing. One of these is its double format, similar to today’s liturgical separation of the Mass into a Liturgy of the Word followed by a Liturgy of the Eucharist. Luke’s story first shows Jesus explaining the Scriptures, followed by the incident in the inn, with the breaking of the bread.

Each of these has its memorable statements in response. With the Scriptures: “Were not our hearts burning within us while he spoke to us on the way and opened the Scriptures to us?” And with the meal: “Then the two recounted … how he was made known to them in the breaking of bread.”

Another pattern is that of the early credal pattern that shapes the speeches of Peter in the early chapters of Acts: “Jesus of Nazareth did works and wonders, was crucified, and was raised by God, as promised by the Scriptures. We are the witnesses.” It is seen in the passage from Acts today. Luke uses it to shape the Emmaus story as well, with the disciples explaining the events to the mysterious stranger. But when they get to the main part of Easter witnessing, they stop. The risen Christ will supply the rest for them.

For reflection: How does the Easter witness continue?

The passing of a good shepherd