The Covenant with Abraham

He loves justice and right

He recalled us to a holy life

Jesus transfigured on the Mountain 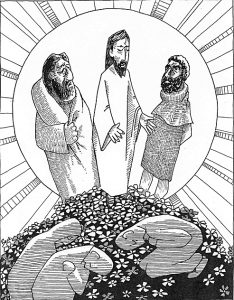 During Lent, the Old Testament and Gospel readings, usually chosen to relate to one another, are instead on separate tracks. The Old Testament selections describe a concise trip through the history of Israel, in five Sundays. Last week, it was the story of Noah. This week it is Abraham. Next week, Moses.

In the Gospels, the first and second Sunday look at the Desert Temptation of Jesus and the Transfiguration. This is the liturgical tradition that is followed every year, no matter what cycle we are in. The three Gospels of Matthew, Mark and Luke all contain this story. Since Mark was the original, and we understand Matthew and Luke to have used Mark as a documentary source for their own writing, often it is useful to compare their writing with Mark’s.

Matthew’s Gospel contains most of the incidents in Mark, and most of them in the same order. At the same time, he has added a number of teachings of Jesus that he found elsewhere among the written traditions of the early church.

In the case of the Transfiguration story, Matthew has introduced a few minor, but significant, changes. One of these is that the two figures found on the mountain with Jesus are named in different order than in Mark. In Matthew, Moses comes before Elijah. This in itself, is a minor detail. But when it is found in the company of other alterations, all pointing in the same direction, it takes on some weight for the reader. We suspect that Matthew wants us to think of Jesus in connection with Moses.

Another difference Matthew has introduced is in the description of the Transfiguration itself. Mark tells of Jesus’ clothes becoming as white as no bleach known could make them. Most likely, he wants us to think of the “man in white clothes” in the story of the empty tomb. In this sense, Mark is looking ahead, past the travails of the Passion of Jesus to the Resurrection beyond. A word of assurance is in order to prepare for the dark times coming.

But Matthew paints the picture differently. He says that Jesus’ clothes became white as light. Also, he adds the further detail that his face shone like the sun. It appears that he wants us to think of Exodus 34:29-35, the story of Moses coming down the Mountain of Sinai, after his encounter with God.

This confirms the suggestion that Jesus is being compared to Moses. We can add these notes to others. Jesus delivers five major discourses in Matthew’s account—chapters 5-7, 10, 13, 18, 24-25. This re­minds us of the five books of Moses, the Pentateuch, or Torah. In addition, Matthew’s account of the infancy of Jesus describes the family going down to Egypt and returning. While Joseph, motivated by dreams in this story, reminds us of the patriarchal Joseph, “the Dreamer,” we are also put in mind of Moses, who brought Israel out of Egypt.

Then there are the passages we saw in the Sundays before Lent began, where Jesus was pictured reworking the law of Moses—“you have heard it was said to your ancestors … but I say to you … .” And yet, Jesus came not to abolish the law but to fulfill it, according to Matthew 5:17.

For reflection: Why would Matthew want to compare Jesus to Moses?

Forming adult disciples in the faith: traveling the road to improvement

Don’t worry about it!

Thomas Merton and avoidance of becoming a ‘guilty bystander’