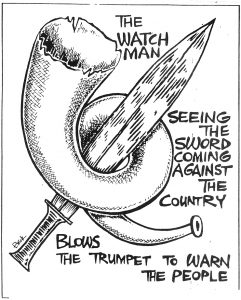 It may be my imagination, but it seems that today we have become more polarized than ever in our values and fierce convictions. Our common discourse has become less civil, tending toward personal attacks (ad hominem) and coarsened language. Today’s Scripture texts arrive in a timely fashion, with further options for our consideration.

The warning makes the issues at stake clear to all. In an ironic way, when it is given, the guilt is greater, since the wicked deed is done with full knowledge. One is reminded of Paul’s thinking about the law, in Romans 7, where he says the law awakens covetousness and leads to lawbreaking (see Rom 7:7-11).

What the prophetic text strives to make clear are the lines of responsibility in bad actions. A priority is given to plain speaking and adult recognition of one’s faults.

The Gospel reading for today is taken from the fourth of the five discourses of Jesus in Matthew’s Gospel. The discussion concerns that situation in which one finds oneself wronged. What to do then? My impulse is to strike back, answering insult with insult, damage with damage. Matthew shows Jesus offering an alternative. He suggests that the one wronged take his or her case to the wrong-doer in a personal way, face to face.

In his commentary on Matthew, Father John Meier surmises that this early community lacked a central authority. He builds his case on the expectation that the victim would naturally go directly to the authorities with the complaint. He may be right. But it is also possible that Jesus is proposing a better route to follow, by assuming personal responsibility for resolving one’s conflicts.

The passage continues on to describe a series of steps to take in the process of conflict resolution. If personal encounter with the other does not work out satisfactorily, then bring into the case one or two (presumably unbiased) others, as recommended in Deut 19:15. There is a danger lurking here, of course, since the accuser might find out his or her case is not as strong as previously thought. Or, if it comes to that, the observers may even lean in the other direction.

In any case, if even that doesn’t work out satisfactorily, then the larger community can be brought into play. The circle thus continues to widen. In Matthew’s situation, this would be the process taken before someone would be excluded from the faith community—in our terms, excommunicated.

The passage doesn’t stop there, however. The following verses are not as linear in continuing the thought, and some have seen evidence of the biblical practice of connecting unrelated sayings by way of catchwords, such as “one or two” or “two and three.”

However, if we assume that there may be some continuity of thought here, we might push our inquiry further. There does seem to be a connection. The saying about binding and loosing, seen earlier in reference to Peter (Matt 16:19), is now addressed to the entire discipleship community, entrusted with the decision of exclusion. For what is bound on earth is also bound in heaven.

This might then be the point of the following sayings. When two agree about that for which they pray, it shall be granted “by my heavenly Father.”

For reflection: What keeps us from personally resolving our differences with an offending party?