He who does justice

We are on the road to Jerusalem with Jesus, and Luke. And hospitality is our theme.

The theme is signaled in the first reading, with the story of Abraham and his three visitors. In semi-arid areas of the world, hospitality is a strict rule, for its presence or absence can be a matter of life and death. Abraham’s hospitality is rewarded with the promise of a son. That son will be Isaac. The name Isaac means “he will rejoice,” and is related to the Hebrew word meaning “laughing.” Sarah’s laughing is a little joke based on Isaac’s name. 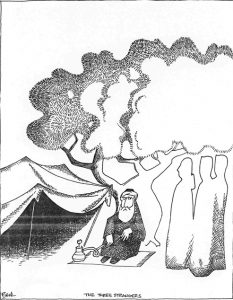 In the Gospel, we have seen hospitality featured in previous weeks. The apostles James and John were appalled at the lack of hospitality of certain Samaritan towns (Luke 9:51-56). They memorably requested permission to call down fire on those towns. And when Jesus sent out 72 disciples ahead of him, there were given instructions (10:5-12). This included matters of eliciting hospitality in the homes and towns they were to visit. And to shake the dust from their sandals upon leaving the towns that failed to welcome them. Much better than calling down fire.

And now we have come to the home of Martha and Mary. The story is one of the better know among Gospel stories, with the two sisters becoming types for labeling people. We know “Martha” people and “Mary” people. It has become part of the language.

The story has also raised questions throughout the ages, since Martha seems to be the one providing hospitality, while Mary just sits there. And yet she is accounted as choosing the better part. Naturally, it would seem that not helping out is preferable to actually doing the work, but Jesus can’t mean that, can he?

A number of interpretations have been given to explain the story. A traditional take on the story is that it speaks to the superiority of the contemplative life to the active life. This would work better if historically the contemplative approach to Christianity hadn’t been developed much later than the writing of this gospel. Another explanation frequently encountered is that this is not part of Luke’s original gospel, but was added later. That hasn’t been entirely convincing, and in any case, it is part of the Gospel as we have it.

Others have suggested that Luke’s Gos­pel, written later than Mark and Matthew, possibly reflects the later development of church life, and roles for women were curtailed. They note that Martha’s service (diakonia) suggests women deacons, and that practice was being phased out. Mary’s role is deemed better for women.

And others suggest that Martha’s problem is her complaining about Mary.

There is no shortage of theories, and this simply suggests a few of them. But what happens when we take the theme of hospitality as our guide? What does this story say about it? Here I might add my own theory to the list.

The story takes for granted the value of hospitality. That is not the question. Rather, the question is how best to act it out. Martha certainly is doing the work. Mary, as Martha vigorously points out, is not. And yet, apparently, Mary is doing something valuable. Could it be that the personal engagement is just as crucial—perhaps even more so—as the activity of hospitality? Perhaps Mary makes Jesus feel welcome in ways that Martha isn’t managing. And her complaint might be a symptom of that.

For reflection: What are your thoughts on authentic hospitality?

The first of all the commandments