THE SOLEMNITY OF THE MOST HOLY BODY AND BLOOD OF CHRIST

You are a priest forever

“Do this in remembrance of me”

The Sunday lectionary selection is based on a three-year cycle, as you know. This feast, once known as Corpus Christi, distributes its attention across the three years by themes. In year A, we hear about the Body of Christ. In year B, we hear about the Blood. This year, which is C, goes elsewhere. My sense is that it takes “Remembrance” as its theme. You can judge for yourself.

Melchizedek, King of Salem, appears twice in the Old Testament, and both instances are in our readings for today, as the first reading and the response psalm. His name also appears numerous times in the New Testament book of Hebrews, in chapter 5 and 7. 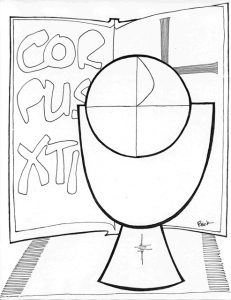 In Genesis, Melchizedek appears suddenly, and disappears just as suddenly. His town—Salem—is thought to be the same as Jerusalem. His name combines the Hebrew words melek and zedeq, respectively meaning “king” and “justice.” He is both a king and a priest, a dual role that was common with ancient kingship. He blesses Abraham after the latter’s successful rescue of his kinsfolk and property from marauders. Because Melchizedek appears from nowhere, and then disappears again, he has prompted speculation and interest. Because his ritual involved bread and wine, he became a Christ figure for the author of Hebrews.

But because he came from Jerusalem, a town that David later captured for Israel, he also had Davidic associations for the Israelites. Psalm 110 belongs to a class of psalms that were written for Royal coronations for kings of the family of David. Another is Psalm 2. When the kingdom no longer existed due to the Babylonian conquest, these psalms were reread as referring to the great King to come, the Messiah. That too contributes part of Christian interest in this kingly figure. Hebrews 5 and 7 spend most of their time with this psalm, rather than the Genesis passage.

Is the reading from I Corinthians connected to this? I’m not sure. 1 Corinthians 11:23-26 presents one of four accounts of the words of Eucharist blessing over the bread and wine. John’s gospel, you will remember, speaks of the foot-washing and doesn’t mention the bread and wine. Of the other three gospels, Paul’s account is closest to that of Luke. These two contain the words “Do this in remembrance of me” (I Cor 11:25; Luke 22:19).

A line that is not part of the reading for today is I Cor 11:29—“For anyone who eats and drinks without discerning the body, eats and drinks judgment on himself.” This is frequently interpreted to refer to the real presence in the bread and wine. But Paul himself provides the interpretation. He is concerned about unchristian behavior at the common meal that accompanied the liturgy (11:17-22). They fail to recognize that the community is the body of Christ, and so, “When you meet in one place, then, it is not to eat the Lord’s supper” (11:20).

As for Luke’s own supper account, that has not been chosen for the gospel reading. Instead, we have his account of the multiplication of the loaves and fishes. His version of the story is fairly minimal. Worth noticing is the Eucharistic language used in the loaves narrative. This includes the prayer (looking up to heaven), the blessing, the distribution of the loaves, and the gathering of fragments.

There also may be an oblique connection with Melchizedek. Along with the offering of bread and wine, with its link to the Eucharist, there is the sense of being removed from the rush of society. Melchizedek comes from nowhere and returns there, while Jesus and his followers are out in a deserted place.

For reflection: “Do this in remembrance of me.” What does this mean in your view?