The Lord is king

Jesus’ final prayer for his disciples 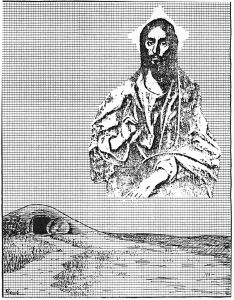 While in this archdiocese we celebrate the Ascension on Sunday, in others it remains the seventh Sunday of Easter. I thought I might compare the two.

The Gospel reading for the Ascension is from Acts 1:1-11. This is the classic passage about the Ascension. The author, Luke, also mentions it at the end of his Gospel, Luke 24:46-53, which is the Gospel choice for today. The two accounts differ in some respects, most notably in Acts’ reference to the 40 days after Easter. The Gospel pictures the Ascension happening on the day of Easter. In this regard, it echoes the timeline of John’s Gospel, which implies that Ascension occurs on Easter (John 20:17). Apart from the timing, the primary message of Ascension is that the risen Christ returns to the Father, his earthly mission complete. But he will send the Holy Spirit to be present in the church from that time on.

Ascension Sunday has a couple of options for the second reading — Ephesians 1:17-23 and Hebrews 9:24-28; 10:19-23. The letter to the Ephesians uses royal images to show the Messiah-King mounting to his throne, “as head over all things to the church, which is his body.” On the other hand, Hebrews favors priestly imagery, showing Jesus entering the true sanctuary, having achieved the sacrifice that the temple rituals strove for, but never quite accomplished.

But when we celebrate Ascension on Sunday rather than on the previous Thursday, we displace the original set of readings for the seventh Sunday. These were chosen to bring the Easter season to completion, setting the table for Pentecost. There is a peculiar sense of absence in the seventh Sunday, filling the time between Ascension and Pentecost. In the liturgical drama, Jesus has ascended, but the Spirit hasn’t yet come to the church. It is a silent in-between period.

The reading from Acts, which has been telling the story of Paul and Barnabas in the later chapters, returns to Chapter 7 and the story of Stephen’s martyrdom. This event, as Acts tells it, prompts the Jerusalem community to leave the city and go into mission. That mission moves out into the larger world, where it launches the story of Christianity as a world religion. But here that is just beginning. The story of Stephen’s death is thus pivotal in Acts. But it also echoes the sense of fragility of the early community, threatened but still courageous, peaceful and yet persecuted. In this it perhaps fits well with the feeling of this uncertain time between Ascension and Pentecost.

The second reading brings us to the final chapter of the book of Revelation. We have seen the New Jerusalem, and now we have the parting words of the heavenly Christ: I am coming soon. The liturgy takes this as a promise for Pentecost, about to occur. The Spirit is the Spirit of Jesus (Acts 16:7),and he will be present to the community.

Probably the Scripture text most sadly missed when we displace the seventh Sunday is the Gospel reading. Each year, this reading is taken from John 17, with the chapter distributed among the three yearly cycles. It is the farewell of Jesus, praying for his disciples. The previous four chapters have shown Jesus at the Last Supper, speaking to the disciples, instructing them, consoling them, giving them advice for when he is gone. And now the direction of his speech shifts as he turns toward the Father. His final prayer to his Father asks that his followers be protected in their work. And now, in this Sunday’s final part of the prayer, he widens his plea to the Father to include all believers, not simply those present with him.

For reflection: Pope John XXIII made John 17 the official prayer of the Second Vatican Council.

Crime, punishment and Catholic teaching on the death penalty