The Third Song of the Suffering Servant

He Put a New Song into my Mouth

Behold the Lamb of God 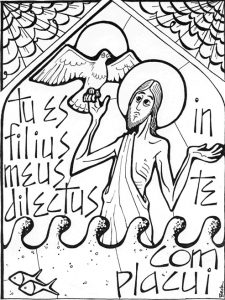 With our farewell to the special season of Christmas, and the arrival of the Ordinary Church Year, we have a new beginning. In the Gospels we skip 30 years and arrive at the ministry of Jesus.

The first reading is the third of the four so-called Servant Songs. The Servant of Yahweh is a figure found in the writings of Second Isaiah (Isa 40-55), who was writing during the Babylonian Exile (587-539 B.C.). There is a long-going discussion as to the identity of the Servant. But the most persuasive argument I’ve heard is that the Servant is a composite image of faithful Israel in exile, maintaining its fidelity to God despite all the contrary evidence that seems to be piling up. The Servant is the ideal Israelite.

Second Isaiah has the task of interpreting their experience for them, in such a way that they can understand it as a mission rather than an abandonment by God. The Servant image is a part of this, insofar as the prophet shows the Servant as witnessing to the nations about a God who is concerned about the fragile as well as the powerful. This God is willing to share in the sufferings that his people undergo.

The New Testament identifies Jesus as the Servant, the truly authentic Israelite. This identification comes in most of the Gospels at the baptism scene, where the voice from heaven cites Psalm 2:7, referring to the Messianic king to come (“You are my beloved Son…”), but then modifies it with Isaiah 42:1, the first verse of the first Servant Song (“…with whom I am well pleased”).

This scene is found in the Gospels of Matthew, Mark, and Luke. But today we hear from John, and the voice from heaven is not found in this Gospel. John does not dwell on the idea of the Servant. Instead, he focuses on other themes related to the Baptist. This Gospel opens the story of Jesus over a span of four days (1:19, 29, 35, 43). The first three of these feature the Baptist.

Each day takes up a different aspect. In the first, John claims to be nothing other than the Voice, testifying to the coming one. This corresponds to the biblical citation from Isaiah 40:3, cited in the other Gospels—“A voice of one crying out in the desert: ‘Prepare the way of the Lord, make straight his paths’” (Mark 1:3). He also delivers the line about not being worthy to untie the sandal straps of the one to come.

However, the passage ends with the affirmation, “Now I have seen and testified that he is the Son of God.” But here John has something else in mind than the Messiah, as in Psalm 2. We understand that the first part of the chapter, about the Word become flesh, is part of the message here.

The second day John talks about the Spirit coming like a dove from heaven. This is in all of the baptism accounts. What is new, and only in this Gospel, is John’s announcement: “Behold the Lamb of God, who takes away the sins of the world.” Later, at the crucifixion, Jesus is discovered to be the new Paschal Lamb, whose bones are not to be broken (John 19:36; Exodus 12:46).

The third day also begins with—“Behold the Lamb of God.” But now for the benefit of some followers, who are directed by John toward Jesus. And after this the focus shifts to Jesus, and John fades out. He is not mentioned in the fourth day.

For reflection: We say “Behold the Lamb of God” in the Mass. Why?

Short notice: For those interested, I have an article on the year of Matthew in the January issue of Sojourners magazine.

Three things you can do to appreciate Mass more fully