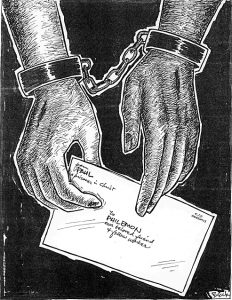 Once every three years we come to Paul’s one-chapter letter to Philemon. It is worth a look. Rather than rephrase what I wrote a couple of years ago, I will simply reprint it:

The letter to Philemon was written by Paul to accompany a slave that he was sending back to his master. Philemon was the master; Onesimus was the slave (his very functional name means “Useful”). His master, Philemon, was also the head of the household where the Colossian church met. Philemon was a prominent Christian. His slave had run away and joined Paul, who was himself in prison. Now Paul is sending Onesimus back to Philemon.

It is customary to suppose that Paul did not challenge the ethically questionable social institutions of his day, such as slavery. After all, here he is sending Onesimus back to his servitude. However, the former Notre Dame prof, Father James Burtchaell, suggested another reading of the matter, in his book “Philemon’s Problem.”

Burtchaell points out that Paul is putting Philemon on the spot. It was customary in Roman times for slave-owners to punish runaways severely. If not the usual option of execution, well then perhaps a symbolic mutilation would be the course of action—maybe an eye, maybe a knuckle or two. Slaves, it seems to no one’s surprise, were not happy with their lot, and might otherwise try to escape.

But Paul asks Philemon, who was converted by Paul and is now a Christian, to treat Onesimus as a brother. Furthermore, Paul plans to visit Colossae after he is released from jail.

So what is Philemon to do? If he metes out the customary punishment, it could hardly be counted as treating Onesimus as a brother. And what would Paul say upon his visit, when they gathered at the liturgy, with Onesimus there with one eye? Or shy a couple of knuckles?

On the other hand, what would happen if no reprisals were taken? The other slaves of the household would run off to where Paul is in prison. They would all convert to Christianity, and who would be left to do the work?

In sum, Paul is creating a difficult situation for Philemon, one that suggests that he had a choice between continuing as a slave owner and forgetting about Chris­tianity, or continuing as a Christian and freeing his slaves. But we wonder: Is the slave owner, the head of the house church of Colossae, ready for that?

Paul did not seem to confront the institution of slavery directly, but it would seem that he put some pressure on it. Philemon is given a free choice in the matter, but he is not free to avoid choosing.

What did Philemon do? A clue is to be found in the letter to the Colossians (4:9), where Onesimus is listed among those in the company of Paul. An early tradition also has it that a certain Onesimus became the bishop of Ephesus. Perhaps it is the same individual. Perhaps not.

In the Gospel reading from Luke, we hear the parables of the tower builders and the king going to war. In each case, the problem is calculating the cost ahead of time. The message is that discipleship has its demands, and we should understand that up front. Calculate the cost before you make the commitment.

The passage from the book of Wisdom addresses the human problem of calculating cost, for we are limited mortal beings. But God’s wisdom supplements our feeble efforts.
The demands of discipleship were not unknown to Philemon. He found it necessary to make some difficult choices. Pre­sumably our own faith life has dictated some difficult choices as well. I’m sure you know what I mean.

For reflection: Why did Paul not address the institution of slavery directly?

Six stations of the cross that identify Jesus with the downtrodden

Don’t worry about it!