A house of prayer for all peoples

Let all nations praise you

A word to the Gentiles

Jesus and the Canaanite woman 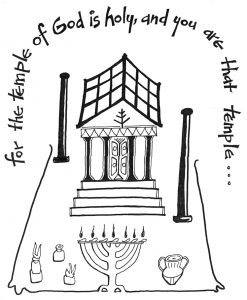 The first reading for today ends on a line that will sound familiar: “for my house shall be called a house of prayer for all peoples.”

The line is from the introductory passage in that part of the book of Isaiah frequently known today as “Third-Isaiah” (Isa 56-66). This final part is thought to be by a separate author, who wrote after the Babylonian exiles had returned to the land of Judah.

The complete passage is Isa 56:1-8, and we have only a portion of it. In general, this introduction looks forward to the time of fulfillment, when the temple will be opened to all. The passage takes two examples of unclean persons who are currently banished from the temple precincts—the eunuch and the foreigner. The first is ritually unclean because of physical dismemberment, since wholeness was one accepted requirement of ritual cleanness. This part of the passage is skipped in our liturgical selection.

The second example, highlighted today, invokes the case of foreigners, deemed unclean for living beyond the outer boundaries that defined the holy—the holy sanctuary of the temple, within the holy city Jerusalem, within the holy land of Judah. At the center of these concentric circles was the ultimate Holy of Holies.

But beyond the perimeter was the zone of the unclean. Today’s passage looks to the termination of such divisions, as those considered unclean will even participate in the temple worship.

So why does that line about “all peoples” sound familiar? Because it is quoted when Jesus cleanses the temple, as part of his motivation. Throughout his ministry in Galilee he has been welcoming the leper, the maimed, the foreigner and the marginalized back into community. Now, shifting his mission to the city of Jerusalem and its temple, he invokes the prophetic writing to announce that the day it anticipates has arrived.

Clearly, since the passage in Isaiah is about inclusion, the key part of the quotation is the phrase, “for all peoples,” as Mark has it. Yet Matthew leaves that phrase out of the quotation. Instead we hear, “My house shall be called a house of prayer.” Nothing about “all peoples.”

Matthew is up to something else. We see that in today’s Gospel reading. In the story of the Canaanite woman, we meet someone who is notably “unclean” on the ritual scale. She is a foreigner. Her daughter has a demon. Furthermore, the entire conversation deals with matters of what is clean and unclean, and how to behave accordingly. Hence the exchange about children and dogs at the table.

But something only the Jewish evangelist Matthew includes is the line, “I was sent only to the lost sheep of the house of Israel” (15:24). We heard this earlier, in the story of Jesus sending out the Twelve on mission (10:6). It traces back to Joseph’s dream, in the Christmas story: “You are to name him Jesus, for he will save his people from their sins” (Matt 1:21). “His people” is Israel, and that prompts Jesus speaking of the lost sheep of the house of Israel. It is not until the final verses of the Gospel that the focus turns away from Israel to the larger world, “Go therefore and make disciples of all nations, baptizing them in the name of the Father and of the Son and of the Holy Spirit” (Matt 28:19).

Does this mean that Jesus’ mission to the Jews has failed? For years, Christians have made that rather self-serving interpretation. But thankfully that prejudice is under revision, as we look more closely at the world and church in which Matthew wrote, himself being something of a Jewish rabbi.

For reflection: Where today do we find the marginalized that we consider “unclean”?

The community of one heart and mind