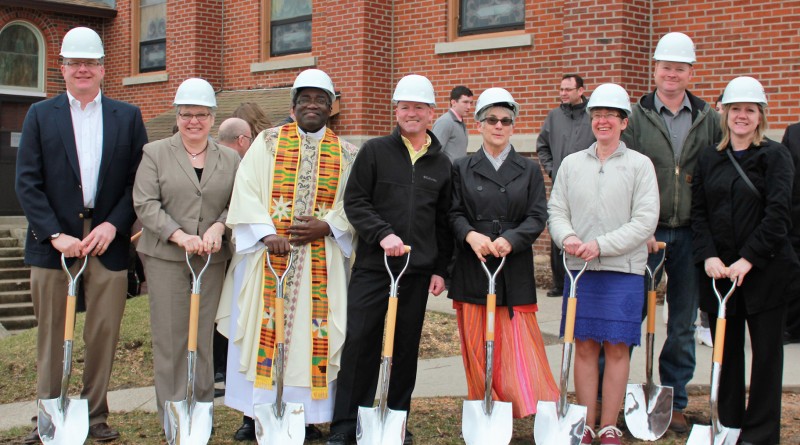 Ss. Peter & Paul, near the border with the Diocese of Sioux City, is growing rapidly due to an influx of young families; major expansion of its facilities has begun

GILBERT — While many churches in rural Iowa are experiencing a decline in membership, a country parish close to the border the Archdiocese of Dubuque shares with the Diocese of Sioux City is bucking that trend in a big way.

Ss. Peter and Paul near Gilbert is in the middle of a population boom, according to Father Jon M. Seda, pastor of the parish, which is linked with St. Thomas Aquinas Parish in Ames.

“The parish is growing and Story County is growing,” said the pastor. “It’s a lot of young families.”

Currently, Ss. Peter and Paul has about 130 households, drawing Catholics from Gilbert, Story City and other surrounding towns. On a typical Sunday, the church, originally built to seat 180 people, is packed. Some worshipers are now seated in the basement in order to accommodate them. The parish is responding to the increasing needs of its members. Lay leaders from the parish joined Father Charles Ahenkorah, associate pastor, for a groundbreaking ceremony Easter Sunday, March 27, to mark the beginning of a two-phase expansion project. Construction crews will complete part one, with an estimated cost of $1.7 million, by December.

Although phase one will add over 40 seats to the church space, that is just the beginning. Phase two will involve an even bigger expansion of the worship area. The timeline for the second phase has not been determined yet. At this point, the parish is in the second year of a three-year fundraising effort. The funds for phase one came from a variety of sources, including the sale of acres of farmland owned by the parish, a single large donation from the estate of a deceased person, and many other smaller private donations, according to the pastor.

So far, parishioners have been generous. In one instance, the parish received two $25,000 donations from two different couples to pay for a bell tower that is part of the plan. Father Seda also serves with Father Ahenkorah at St. Thomas Aquinas Church and Catholic Student Center, where they are also pastor and associate pastor. The priests minster to students studying at Iowa State University in the nearby city of Ames. Father Seda said many have been drawn to Ss. Peter and Paul for the advantages of living in a smaller rural community and the lower cost of living in the area. Ss. Peter and Paul began on the prairie in the 1850s, with people gathering in homes or schoolhouses.

The present church was built in 1916, according to the history of the archdiocese published in 2012. A school operated at the parish from 1891-1898, and then again from 1911-1920. In 1960, the church building was renovated. From 1968-77, Franciscan sisters lead the religious education program from a home turned into a small convent. The parish had a resident priest until 1987. The church building is located between Gilbert and the Sioux City Diocese. It is so close to the county line, that a priest celebrating Mass with the rear doors of the church open, could literally see into the neighboring Diocese of Sioux City, Father Seda explained. Ss. Peter and Paul is the mother church of St. Cecilia Parish, also in Ames, which, in turn, is the mother church of St. Thomas Aquinas, according to the pastor. For many years, Ss. Peter and Paul lost population, while the two Ames parishes were home to the bulk of the area’s Catholics.

According to population figures from the archdiocese that covered the period from 1995-2009, Ss. Peter and Paul’s population had decreased 26 percent during that time. Now, the future of the parish looks bright as work crews are fully engaged in the new construction. “It’s a country parish,” said Father Seda. “People come from different towns. There’s a lot of enthusiasm and a lot of vitality.” Mass will be at St. Petri Lutheran Church in Story City until construction is completed in December. For more information on Ss. Peter and Paul Parish, visit http://ssppgilbert.net. 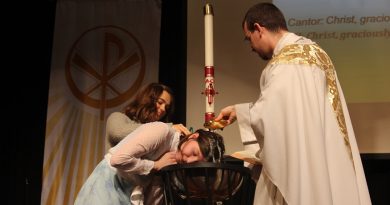