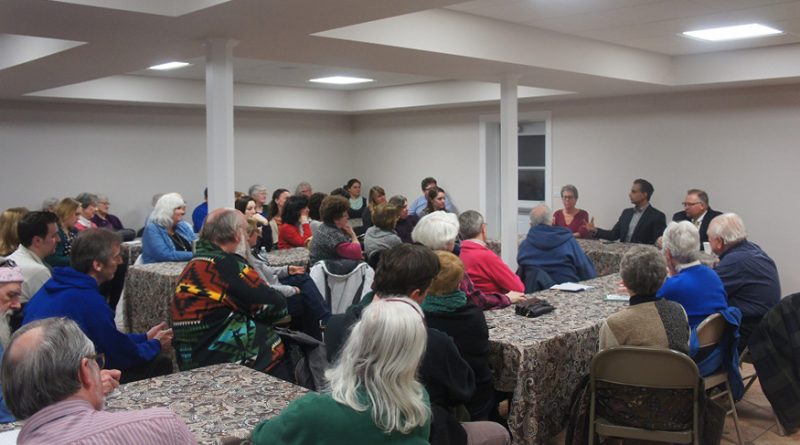 DUBUQUE — It’s a Thursday evening, and about 90 people — ranging in age from teenagers through senior citizens — are gathered in a large meeting room at one of Dubuque’s houses of worship. A Mennonite Christian man stands at the podium, discussing a story familiar to many of us: the parable of the Good Samaritan (Luke 10: 25-37).

After his 10-minute presentation, another community member from the Tri-State Islamic Center comes forward to offer a different interpretation of the parable, stressing its importance as a sign of God’s power and mercy. Finally, a member of Dubuque’s Temple Beth El offers yet another perspective, interpreting the characters in this familiar story as representing different aspects — good and bad — of every human being. After these three presentations, the floor is opened to questions, and then the crowd breaks into small groups to discuss what we’ve seen and heard over a cup of tea.

Every month during the academic year, at a different Dubuque house of worship or university, an interfaith discussion takes place. Now in its sixth year, Children of Abraham brings together young and old, students and community members, to discuss a wide range of topics – from love and relationships to environmental concern to beliefs about the afterlife – in the context of the three Abrahamic religious traditions.

“We started as an informal group of friends talking about faith,” says University of Dubuque computer graphics professor and Temple Beth El member Alan Garfield. “This built an element of trust. Meetings got larger, and eventually we decided to make it public. We wanted to discuss our traditions, not from the perspective of an official position, but that of ordinary ordinary people practicing their faith.”

John Eby, a Loras College history professor and co-founder of the organization, stresses that Children of Abraham is focused on sharing ideas, not prosely­tizing. “One important thing is that while we do celebrate common ground, we don’t avoid difference. We think it is important to listen respectfully to another person and come to see a new idea. By honestly listening to voices different from our own, we are opened to more nuanced perspectives leading to rich discussions.”

And indeed, participants learn – which is why they keep coming back. Loras mathematics professor Angela Kohlhaas, who grew up in a small town and was educated at Notre Dame, states that before attending Children of Abraham, she had never personally encountered a Jewish or Muslim perspective. “My husband is Mennonite, so I am used to ecumenical dialogue, but this interfaith discussion was new to me. I have learned a lot. In some ways, the Jewish perspective seems similar to my husband’s Mennonite one, with a focus on building the kingdom of God on earth. The Muslim perspective, through its focus on developing spiritual discipline and asking questions about the end of time, really resonates with me as a Catholic.”

Sinsinawa Dominican Sister Betty Kugi, O.P., concurs that regular attendance at the organization has enhanced her knowledge. “Last year there was an absolutely fantastic presentation on the Torah. The Jewish Scriptures are part of the Catholic tradition, and this helped me to understand my roots much better,” she says. “Meanwhile, learning about Islam has been amazing. I’d heard and read about it, but seeing the tradition lived out and hearing about it is another thing. Their whole philosophy is submission, submitting to God completely. It is a different mindset than what I am used to.”

A strong, growing interest in Islam among group members, as well as the Dubuque community’s desire to show hospitality and solidarity with the Muslim community at this time, may be one reason why the group’s Feb. 16 meeting at the Tri State Islamic Center’s new mosque in Dubuque drew its largest crowd ever.

“It makes me feel good to know there are people who care, who understand and trust me,” says Adib Kassas, a physician originally from Syria, member of the mosque, and Children of Abraham co-founder. “This organization has taught me that Jews, Christians and Muslims are all human beings who have received the same message from the same God in different forms at different times.”

Children of Abraham’s next event, to be held at the University of Dubuque’s Hadley Auditorium on March 23, is titled “The Importance of Interfaith.” At this event, the organization’s founding members will discuss the impact that Children of Abraham has had on them.

For Eby, engaging in interfaith dialogue is a political act as well as a spiritual one.

“Living in the American democracy involves embracing the diversity that is our culture,” he says. “These are foundational principles that make our country what it is. All members have equal dignity. Of course, it is hard. We don’t do it perfectly. But if we don’t take an active role in trying to promote universal equality, then we fail to embrace a fundamental principle of our country.”

“I hope that at next month’s event the participants will reflect on what motivates interfaith interaction and dialogue from within our own traditions,” he adds. “As a Catholic, I am deeply motivated by both Scripture and church tradition. In Luke 7, a Roman centurion sends a message to Jesus asking him to heal his servant. He knows enough about Jewish purity laws to understand that a Jew would be considered defiled on entering his house, so when Jesus arrives, he says ‘Lord, I am not worthy that you should enter under my roof.’ Jesus laughs this statement off. There is no separation, and the centurion is someone he could embrace.”

“When I say the centurion’s words at Mass, I am identifying with him. I know Jesus should not come into my body, but by grace and the universal love of God, he does so eagerly. The way I receive Jesus is that way I should receive others of different politics, religions, philosophies. They should come to my house, and I should go to their house of worship. I want to ­carry Christ into those situations, reveal the universal love of God for everyone.” 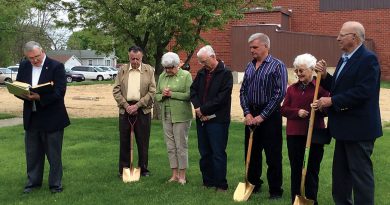