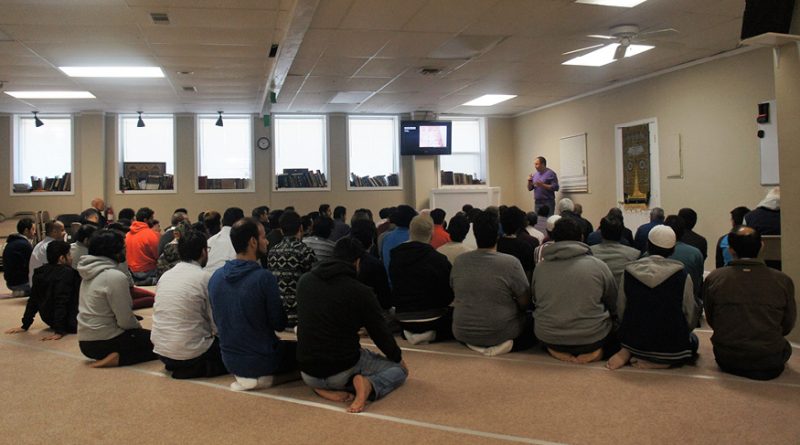 Reflects on her experiences

DUBUQUE — Although the room was simple, I instantly knew it was a sacred space. I followed the others’ example and removed my shoes. “Should I cover my head?” I asked the gentleman who greeted me at the door. He replied that it was not necessary, but on second thought he handed me a scarf which I wrapped around my hair. This makeshift hijab made me feel strangely comforted, as if God were the one covering me. For the first time, I felt that I understood the rationale behind Christian chapel veils. My fingers tingled with excitement. Although I’d visited mosques before, I’d never witnessed Friday prayers. Inspired by the Saudi Arabian students I’m currently teaching at the University of Dubuque, I’d decided to visit the Tri-State Islamic Center during their time of worship.

The service began, and the gentleman who had lent me the scarf began preaching the khutba, a sermon that reminded me of many of the Catholic homilies I’d heard. He exhorted us to trust in God, always remembering that God is the source of all our blessings. Many latecomers trickled in, including several students who did a double take when they saw their teacher seated at the back.

The service then proceeded to the dua, or prayers. Despite many obvious differences, like the dearth of women (who may attend Friday prayers if they choose to but are not required to do so) and the lack of a ritual resembling the Eucharist, I noted many liturgical similarities between this service and the Catholic Mass I know and love: gestures such as kneeling, a balance between communal prayer and silent contemplation, and the exchange of a sign of peace. Much to my surprise, I felt very much at home. I left the mosque feeling like I’d travelled to a distant city and unexpectedly bumped into an old friend in the street. I felt that the same God whom I encounter in the Catholic Mass was present here as well.

“The most important thing I want people to know about my religion is that it calls for mercy, justice and peace,” said the Tri-State Islamic Center’s president, Dr. Rami Eltibi, a Palestinian cardiologist who now lives in Dubuque and works at Mercy Hospital. “So many people only know Islam from the bad news they hear in the media. They think we worship idols. They do not know that ‘Allah’ is simply the name of God in the Aramaic language – the language that Jesus spoke – and that in my part of the world Christians also call God by this name. I want people to see the beauty in Islam and understand that it is a continuation of the same message that has been given since Adam and Eve: to worship only one God, to bring mercy to the world.”

Although Muslims have lived in the tri-state area for 35 years, it was the arrival of IBM to Dubuque that built the community, and the recent influx of international students into the region has also influenced it. Established in 2010, the mosque is now a spiritual home to 25 families and around 150 students from UD and elsewhere. On Dec. 1, they are moving to a larger space.

Aziz Alqrainees, who studies aviation management at UD, is grateful to have the mosque in Dubuque and sees it as an institution that might help build community. “International students are doing a lot to enhance Dubuque’s economy. We are eager to help build the mosque and see it as an investment in the future.” When asked what he wants people to know about his faith, he echoed Dr. Eltibi’s statements. “I was never taught to be violent or to hate others. I want people to know that ours is a religion of kindness and love in the tradition of Jesus and Moses, and that respect is one of its basic requirements.”

As religious minorities in this region, some members of the center have faced discrimination, but most report a friendly and receptive atmosphere. “Occasionally my kids run into difficulties with others at school,” said Mohamed Mustafa, a ­Sudanese-American engineer who works at John Deere. “My wife and I always tell them that being different is not bad. Freedom of religion is a big part of what this country is about. We talk about the things they hear in the news, and we explain to them why violent acts done in our religion’s name do not reflect its actual teachings. We want them to be comfortable in their own skin.”

Some area Catholics are eager to engage in shared activities with the mosque members. Children of Abraham, a Dubuque-based ecumenical Christian, Jewish and Muslim organization holds monthly public lectures, Bible, Torah and Qu’ran study, as well as interfaith discussions. At least one event per year is held at the mosque.

“Our purpose is to promote a peace-­building atmosphere across lines of diver­sity. It is not about changing people’s opin­ions or altering identities, but helping people of all faiths to become comfortable with all traditions,” said Loras College professor John Eby, a Catholic who co-founded Children of Abraham six years ago. “The Tri-State Islamic Center has a strong orientation toward peace building and wants to be connected to the community.”

Once the community moves to its new location, mosque members intend more outreach, like an open house and public lectures for people of all faiths. “Many of our members are involved with Children of Abraham, and we hope to do more with them once we move into our new space,” said Dr. Eltibi. “We want to be a welcoming community, and we hope that people of all faiths will come and visit us.”

Pitas is a professor at the University of Dubuque who is a member of St. Raphael Cathedral Parish.

Muslims pray and listen to a talk at Tri-State Islamic Center in Dubuque recently. The mosque is expanding and a new building is under construction to house worship services and other functions. (Photo by Jeannine Pitas) 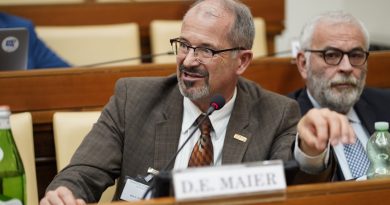