Last year, at the end of the Year of Mercy, our Holy Father Pope Francis – God grant him health and long life – announced a new Church observance: the World Day of the Poor.

This will be an annual observance, scheduled each year on the 33rd Sunday in Ordinary Time, occurring this year on 18/19 November 2017.

Other “world days” are set aside to pray for something, such as the World Day of Prayer for Peace. But this “world day” is not referred to as a day of prayer for the poor. What, then?

Pope Francis has talked about this day in a number of ways, such as:

This is important, our care for the poor, because for us holiness means the imitation of Christ, and Jesus was poor, preached poverty, and modeled caring for the poor.

Jesus was poor, not in a dire material sense, but in that he didn’t possess anything, sharing with his disciples out of a common purse (Luke 8:1).

And Jesus did not require his followers to be poor, there being no virtue in poverty, in and of itself. Nor did he condemn people for being wealthy.

But he did condemn people for selfishness and refusing to care for others in need. And he did ask his followers to share their possessions in common, just as he did, so that no one would be in need (Acts 2:44-45).

That is what is asked of us today, to share our time, talent and treasure with the Church for its mission, and with the poor, so that they might enjoy the things needed to live in dignity.

This is an important practice of our Catholic religion, just as much as worshipping at Sunday Mass.

On this first observance of the World Day of the Poor Pope Francis will celebrate Holy Mass in St. Peter’s Basilica with the poor of Rome, and then host a sit-down lunch for them in the Audience Hall next door.

Not everyone in every place can do something like that, but we can and must do something, in keeping with our own circumstances and resources. Here are some suggestions:

Whatever our overture to benefit the poor, hopefully it won’t be just a once-a-year observance, but will inspire a once-a-day at least practice, seeing care for the poor as the first and most important practice of our Catholic religion.

The poor need us in order to enjoy those things needed to live in dignity. And in a real sense, we need the poor in order that, by our care for them, we can show that we are true followers of Jesus. 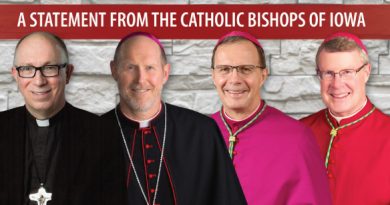 Part 9: the vocation to the single life