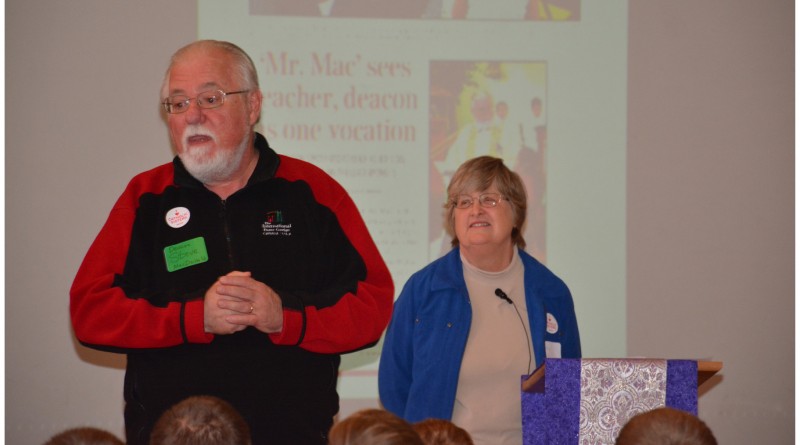 EPWORTH — For forty years, he was “Mr. Mac” to the second graders he taught in four downtown Dubuque Catholic schools. For the last 26 years, others have called him “Deacon.” Deacon Steve MacDonald and his wife Kathy were the keynote speakers for the eighth annual Sixth Grade Vocation Day at Divine Word College on Thursday, March 10. More than 250 students from seven area Catholic schools joined the event, which is sponsored by the Dubuque Area Vocation Association (DAVA). Nearly a dozen religious communities as well as the Archdiocese of Dubuque took part in the effort to plant the seeds of vocation among the youth.

During the half-day event, the students joined break-out sessions with religious sisters, priests and a brother as well as Deacon Steve and Kathy. Each presented different aspects of religious life, according to Len Uhal, national vocation director for the Society of the Divine Word, which operates Divine Word College. “Each one picks a different topic, such as prayer, discernment, community living, vows, and so forth,” he said. “We want to expose the students to a variety of vocations and ways that people can be of service to the church.” During their keynote presentation, the MacDonalds shared their diaconate lives with the students. Though he was the one ordained, Deacon Steve emphasized how important his wife is to his ministry.

They are a team, which is the case for the majority of deacons. “In fact, when we are ordained, the first thing the bishop asks is permission from the wife for us to be ordained,” he said. “The three-and-a-half years of training I went through to be a deacon, Kathy was right there doing the work, too.” Married in 1969 and now retired, career-­wise the couple shared much in common. Kathy was the director of religious education for 5 years at Holy Ghost and then, for nearly 30 years, an elementary school teacher in the Balltown/Sherrill and later Lasalle Catholic schools. Both earned master’s degrees in Family Ministry from Regis College in Denver, Colorado, and both have been active in their parish, Holy Spirit Parish, in Dubuque. In 1985, Steve saw an item in his parish bulletin asking for men to consider becoming a deacon. With encouragement from his pastor, Fr. Carl Schmitt, and other parishioners, he entered the program. After a three month trial period, he and Kathy began their training, and on Sept. 30, 1989, he was ordained a deacon in the Archdiocese of Dubuque. Since then, it has always been about service, finding short-handed areas of need—“plugging holes”—in the parishes and the archdiocese.

“A deacon represents service,” Kathy told the students. “The deacon at Mass is a sign that the church calls all of us to accept our personal opportunities for being of service to others. It’s a sign that we can’t do it alone, too.” That service can come in many shapes and forms. Some deacons are assigned to parishes, to assist the pastor in any way they can. For some, that is taking an active role in the Mass—everything but the consecration. They can also preside at baptisms, marriages and funerals and some help with homilies. “Priests and deacons often spend an entire day researching, writing, and prac­ticing to do a good homily on the weekend,” Kathy said. “Most people don’t know the hours that go into it.”

Fortunately, that is a labor that Deacon Steve enjoys at his parish. But his primary duties are in service to Archdiocesan Office of Ministry to People with Special Needs, coordinating activities for persons with disabilities. “Kathy and I also do the religious education classes for residents at Hills and Dales in Dubuque, which cares for people with severe and profound disabilities,” Steve said. “I also serve people who are suffering from mental illness and those who are confined to nursing homes.” These ministries strike close to home for the MacDonalds, who have three daughters, one of whom has special needs and faces health concerns. For that reason, over time they have recruited members of their family—daughters and grandchildren—to help out with their ministry, from retreats to Special Olympics events. One of their daughters, Sr. Stefanie MacDonald, OSB, says the example set by her parents helped her make the decision to enter religious life. “They always encouraged us to get in there and serve,” she said. “But, since my dad chose being a deacon as a vocation, that showed me that religious life was a possibility for me as well—if I wanted to be a sister, I could.” The church calls everyone to be of service and some will be called to be a priest, some to be a sister, others to be a brother or deacon. And some will be called to married life, which Deacon Steve said is also a vocation. Kundert is a public relations specialist with Divine Word College in Epworth.

Photo: Deacon Steve and Kathy MacDonald, during their presentation in the Main Chapel at Divine Word College. 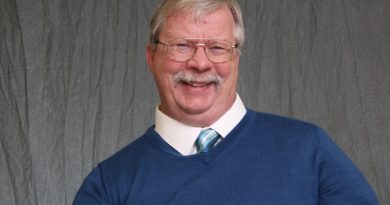 Deacon in wheelchair adapts to disability; continues in ministry