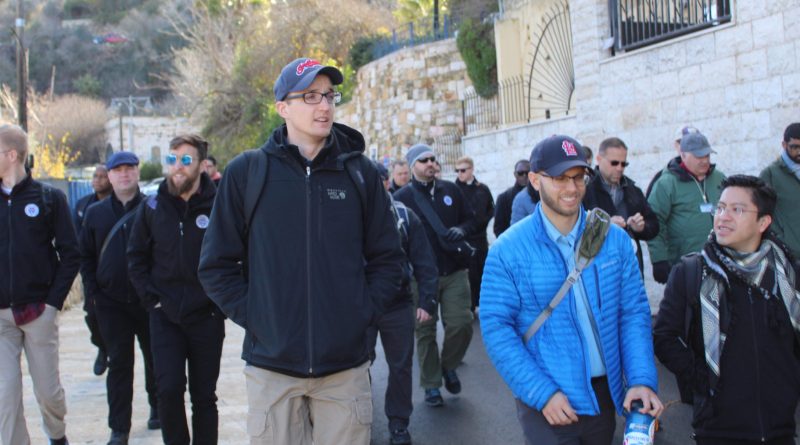 MUNDELEIN, Ill. — Scripture tells us that “all things work for good for those who love God, who are called according to his purpose (Romans 8:28).”  In one local seminarian’s case, those things included a serious illness that almost took his life.

“I became very sick, near death,” recalled Martin Coolidge. “It took me the better part of six months, almost a year, to recover.”

Coolidge is now in his third year at Mundelein Seminary near Chicago where a number of young men from around the world are pursuing their vocations to the priesthood. The 28-year-old became focused on discovering what God was calling him to while studying as a sophomore at Iowa State University in Ames (ISU). He had been attending Mass at St. Thomas Aquinas Parish and Catholic Student Center before his near-death experience. ­After overcoming a very bad case of sepsis, Coolidge accepted a call to serve by bringing the Eucharist to the sick. He was later invited to join a priesthood discernment group led by Father Jon Seda.

“I was (treated) at that same hospital where I eventually went to visit people,” he said. “Father Jon came, anointed me, gave me Communion. There was so much power, spiritual strength and an encounter with Christ there that it spiritually … woke me up (and) renewed my life in Christ as a Catholic. When I did recover, God had kind of put that on my heart — this great thanksgiving for healing me, for renewing me spiritually. I felt like I could do this for other people. As a way to give thanks to God, I could bring them Communion, bring them prayer.”

Coolidge learned a lot from the patients he served as a eucharistic minister.

“I saw how important it was for them to receive Christ,” he said. “The Eucharist comforted and strengthened them in their time of need. I also saw how people need a physical person to be Christ for them when they are struggling.”

Coolidge was born in Ft. Wayne, Indiana, to parents Gregory and Sallie Coolidge. He has an older brother, Andrew, and a younger brother, Michael. When he was 14, his family moved to Elyria, Ohio, with his dad’s job. He came to Iowa in 2010 from the Cleveland, Ohio, area to study at ISU. His initial goal was to become a meteorologist. Studying nature and the weather sometimes led him to contemplate the divine, especially during the instances when weather experts, despite the aid of advanced technology, didn’t get the forecast right.

“For me, it’s showing that God’s creation is a mystery,” he said. “We can’t fully comprehend it. It’s transcendent.”

After completing his undergraduate degree, he entered graduate studies at the same university. It was then that he felt the call to seminary. Like most of the current seminarians in the Archdiocese of Dubuque, he studied for several years at St. Pius X Minor Seminary at Loras College in Dubuque, before moving on to what is called major seminary at Mundelein. While being in formation, his experiences serving in the community while he also studies theology and other subjects has had a significant impact on his spiritual journey.

“I can remember one time I was on internship last year … explaining to one family the courses I had been taking and what I still have to do and (I said), ‘Sometimes it’s a real struggle to study,’” Coolidge recalled. “The husband (said), ‘You’ve got to study; you’ve got to know your stuff because I need you to be a holy priest and I need you to be joyful because that’s how you’re going to witness to Christ; that’s how you’re going to help me and my family get to heaven. … That just blew me away. It really inspired me to know I need Jesus and I need to trust in him and I need to continue to do that in my vocation.”

Mundelein Seminary has a tradition of sending seminarians in their third year on a pilgrimage to Israel that lasts for several weeks. Coolidge and other seminarians in his year left for that journey in late January. The trip gives them the chance to deepen their faith and knowledge through visits to many holy sites.

In a blog post written as he traveled, Coolidge reflected on visiting the Church of the Nativity, which was built on the site where historians believe Christ was born. In order to enter this place, pilgrims must bend down to cross a small threshold called the “Door of Humility.”

“This narrow and short opening was originally constructed to prevent soldiers from riding their horses into the sacred space,” wrote Coolidge. “However, this practical decision, out of reverence for the birthplace of Jesus, has wider implications. The tiny entrance forced us to lower ourselves before encountering the place of the Christ’s birth. This physical action of bending as we entered reminded us who we would be encountering inside. Before we could meet Jesus in this holy place, we had to throw off pride and selfishness and put on the virtue of humility.”

Coolidge noticed a crucifix hanging above the steps that lead down to the Nativity site.

“I descended the steps with holy fear and, when I bowed down to kiss the spot of Jesus’ birth, I was filled with love,” he wrote. “All I could think was, ‘And the Word became flesh, and made his dwelling among us (Jn 1:14).’”

Coolidge walked around the place which once contained the manger that held Jesus as a baby.

“I thought of what the angel said to the shepherds on that holy night, ‘And this will be a sign for you: you will find an infant wrapped in swaddling clothes and lying in a manger (Lk 2:12),’” wrote the seminarian. “What a strange but beautiful sign of God’s wondrous love for us! So vulnerable, so humble – just like Jesus exposed and hanging on the cross. That experience of holy fear came over me again; I experienced God’s love for me and the whole world in a special way at this holy site (thank you, Jesus!).”

When Coolidge and his classmates return to the United States, they’ll have a lot of important work ahead of them. In their third year of major seminary, candidates are ordained transitional deacons. They then undergo another year of  preparation before being ordained priests. The formation process for priests usually takes between six to eight years in total. Coolidge thanked his family, Fathers Seda and Richmond Dzekoe and lay people for their support. He wanted people to know seminarians look forward to living out their vocations.

“We see ourselves as set apart by Christ to be his priests, but we’re not set apart from those we’re supposed to serve,” said Coolidge. “In the seminary here, our priests and our formators are really trying to tell us that we really need to be with the people serving them. … We’re called in a unique way to be a priest to sacrifice for them, to serve them. … In our formation, what we’re doing in our internships, in our ministries here in the Chicago area, in our prayer, we’re trying to learn to be with God’s people, to love them.”

For more information about the ArchdioceseOne Appeal, visit ArchdioceseOne.org. Those interested in reading more about the seminarians’ pilgrimage to the Holy Land can find their travel blog at https://usml.edu/pilgrimage/.

Martin Coolidge, a seminarian for the Archdiocese of Dubuque,  is shown (front, left) during a tour of the Holy Land with his classmates from Mundelein Seminary. To his right is Eric Zen-isek, another local seminarian. The class, now in its third year at Mundelein, left for the pilgrimage in late January. (Photo courtesy of Mundelein Seminary)