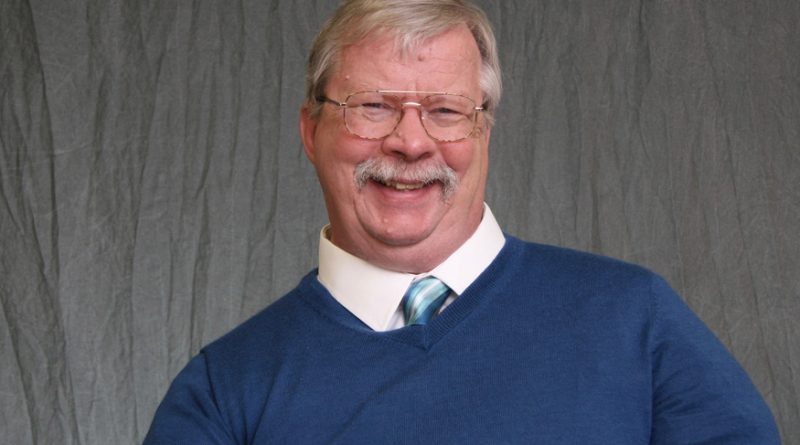 CLEAR LAKE —When Deacon Darrel Courrier preaches about once a month at St. Patrick Parish in Clear Lake, he doesn’t stand behind an ambo. Instead, he reflects on God’s word from his wheelchair.

“We get bad breaks in our lives, all of us do,” he told the congregation in one of his homilies. “That’s part of life, but with faith, you can survive and put up with anything.”

Over the last five years, the deacon and his wife, Marcia, have had the opportunity to practice what he preaches. After being in good health for most of his life, the Minnesota native lost the use of his legs and right arm in 2013 after a blood clot burst in his brain. During the Courriers’ first couple of years in Clear Lake, they had become active members of their parish, serving in many ways before the health crisis hit.

The community came to their aid with cards, letters and prayers as Deacon Courrier, a U.S. Army veteran, embarked on a long recovery. He spent about four and a half months recovering at a Veterans Administration hospital in Minneapolis, before spending several more months at Heritage, a rehabilitation center in Mason City. Despite the challenges of his new disability, Deacon Courrier maintained his faith.

“I was lucky that because of the faith, family and friends’ support, I never had any depression or any lack of desire to continue doing what I’m doing,” he said. “I even discovered that while I was in the hospital … I could even do ministry to the people who were taking care of me and the fellow members of the hospital there and others who were in rehab for all kinds of brain injuries. I could also do that in the rehab center in Mason City.”

Deacon Courrier’s path to becoming a strong witness for Jesus as an ordained member of the Catholic clergy wasn’t a conventional one. It began when he met his wife, Marcia, who is originally from Britt, Iowa. She was working in the Twin Cities at a local hospital and living with Deacon Courrier’s cousin. Raised in the Presbyterian Church, the young man started to learn about Catholicism from his new girlfriend.

“I had been going to church a lot with her whenever I was with her even before we were married,” he said.

After marriage, the couple settled in the Minneapolis area. Marcia joined St. Thomas the Apostle Parish. It would take several years before Deacon Courrier’s conversion, which occurred gradually. After his wife volunteered to teach a confirmation class, Deacon Courrier stepped up to assist.

“The guy that was co-teaching with her stopped teaching, so I helped her out,” he recalled.

Even though he wasn’t Catholic yet, the future deacon began studying the church, working his way through multiple objections or questions he had.

“The things that bothered me, when I found out what they really were, they didn’t bother me at all,” he said.

By his third year assisting his wife with the confirmation classes, the local pastor asked if he’d be interested in joining the faith. After completing an RCIA course, Deacon Courrier became Catholic at age 28.

When not working to make a living in the computer and medical fields respectively, Deacon Courrier and his wife threw themselves passionately into service at their parishes. While at SS. Peter & Paul, also in the Minneapolis area, the Courriers attended their first informational meeting about the diaconate. At age 50, Deacon Courrier began the formation program with his wife. He was ordained in 2001.

“It’s been an absolutely awesome ex­perience because I was raised in the faith, and I thought I knew a lot,” said Marcia Courrier of accompanying her husband in his journey to the diaconate.

“I found out I didn’t know very much at all. The preparation expanded (the faith) for both of us.”

Deacon Courrier and his wife moved to Iowa in 2011 to be closer to family after retirement. Two years later, the blood clot changed their lives forever.

There have been some major adjustments. Deacon Courrier can no longer do home visits of the sick as he used to or other functions, but he still participates in service and performs sacraments like baptism when called upon. Father John Gossman, pastor at St. Patrick, worked with parishioners to make the altar and sacristy handicapped accessible so the deacon can assist at Mass.

“One thing I really regret is I can’t raise the chalice anymore,” said Deacon Courrier.

Although he acknowledges his limitations, he doesn’t dwell on them.

“I tend to be much more focused on all the gifts God has given me and all the graces he has brought into my life, and I pay very little attention to that which I can’t do,” said Deacon Courrier.

There are some advantages to having experience with a disability. Deacon Courrier has performed ecumenical prayer or communion and word services at the rehab and assisted living facilities in Clear Lake for the last few years. He also regularly visits Heritage Rehabilitation Center in Mason City to lead prayer. He says he can relate to patients because he knows firsthand what they are going through. Deacon Courrier and his wife have also noted that his ability to give good homilies has also been affected.

“He has young people who actually said to him, ‘and that’s very good news for us all’ because that’s how he ends every homily, so they’re listening,” said Marcia Courrier. “He was a good preacher in the first place, but I do think he’s more effective from the wheelchair.”

In recent weeks, Deacon Courrier has been hospitalized due to chronic problems that have surfaced since the initial blood clot. He is now undergoing treatment. The Courriers are grateful for the visits and other support.

“Our parish community has been really great,” said Marcia. “Our goal is to get Darryl well enough so he can go back home. We appreciate all the prayers.”

Deacon Courrier remains in good spirits. He says that being a deacon, he’s learned that people “project their goodness onto you” and that you can “bring Jesus into the moment.”

“For me, the great grace of ordination is being part of the official church and being able to bring that to the moments where I am doing ministry,” he said.

After being healthy for the majority of his life, Deacon Darrel Courrier of St. Patrick Parish in Clear Lake lost the ability to use most of his limbs about five years ago. (Contributed photo) 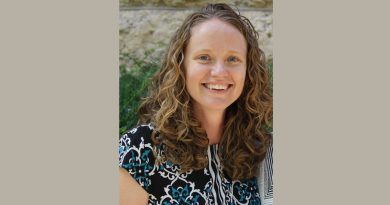 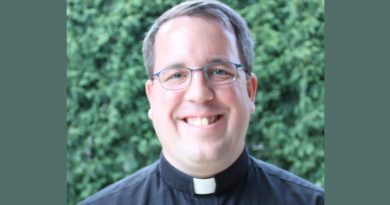