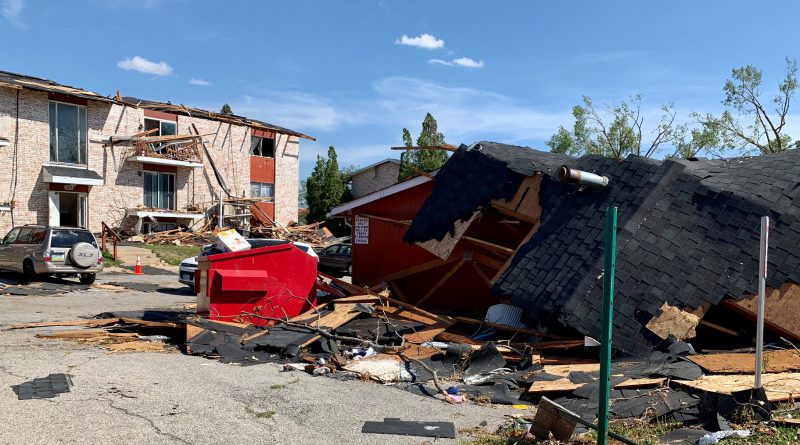 CEDAR RAPIDS — Sirens usually used to warn people about approaching tornados went off about 15 minutes before the derecho storm struck the part of Cedar Rapids where St. Pius X Church is located.

Michael Becker, pastoral associate at the parish, realized eventually that what he was witnessing Aug. 10 was no tornado.  He was at work when heavy rain and wind gusts of over 90 miles per hour pounded the area for upwards of 45 minutes. After getting people in other parts of the parish complex to safety, he got a glimpse of the mayhem through windows.

“It was a loud rush of sound that kept coming,” recalled Becker. “You’re watching trees fall down.”

At some point during the storm, the rubber covering on the roof of the church came off, sending a flood of water into the worship space that kept pouring in for hours afterward. A tree put a hole in the rectory roof and knocked out power, but amidst the chaotic scene there was still something to be grateful for.

“That was the amazing part,” said Becker. “The altar was untouched. It was dry. Everything else was drenched.”

Derecho means “straight” in Spanish. The storm rampaged in a line across the Midwest, from South Dakota, through Iowa and into Illinois and Ohio. Those who study the weather use the term derecho to refer to a widespread wind damage event caused by severe thunderstorms, according to the Weather Channel. The Aug. 10 derecho was estimated at 40 miles wide and over 700 miles long. It lasted for 14 hours. It is estimated to have killed four people in the Midwest, including three in Iowa, a report from USA Today said.

Nine counties in the Archdiocese of Dubuque were impacted by the storm, according to Megan Stammeyer, public relations director for Catholic Charities of the archdiocese.

As part of Charities Disaster Relief Ministry, she was able to visit affected areas. Many homes, farms and businesses were damaged. Churches and schools were also affected, including St. Wenceslaus Parish, also in Cedar Rapids and St. Michael Parish in Norway, among others. The disaster ministry focuses on connecting people with a variety of resources and social service agencies locally in the wake of a disaster. In this case, Stammeyer reported that there was a great need for information. The ministry was on the ground working with local organizations.

“We expect this to be a long term recovery,” said Stammeyer. “Once the trees are cleared away and the power restored, the deeper issues of poverty and inequality will continue to damage families across our state.”

With over half the tree canopy in the Cedar Rapids region having come down,  the scale of the event is unlike anything in recent history.

“We sat down as a staff and everyone had damage (at their homes),” said Becker, referring to a meeting Aug. 18 at St. Pius Parish. “I’m working on a plan to reach out to every one of our parishioners.”

Metro Catholic Outreach (MCO), a service agency supported by the Catholic parishes of the Cedar Rapids area, lost perishable food items used by its food bank due to power outages. Many residents also lost food for the same reason. Kate Getty, executive director of the agency, is working with staff to support people who need food and have many questions, such as how to apply for grants or file insurance claims.

“I am a born and raised Iowan. It is by far the worst disaster I’ve ever seen,” said Getty. “We’re seeing people asking, ‘What do we do next?’”

As a result of the storm, about 1 million people in the affected states lost power. In the Cedar Rapids area, an estimated 20,000 were still without electricity as of Aug. 18, according to Getty. Although power is back on at the Sister Mary Lawrence Center where MCO is located, she reported that her home is among those that still doesn’t have power.

She said hundreds of homes and apartments in her city are no longer suitable for occupation. Getty felt blessed that the damage to her home was not as serious.

“A tree fell on our garage,” said Getty. “It’s a total loss. We lost all the trees in our back yard.”

Getty hopes more will be done by elected officials to respond to the disaster.

“We felt so neglected for five days,” she said.

Getty emphasized that people affected need prayers, cleaning supplies, food and other basics. She believes it will take months for the Cedar Rapids area to recover.

Catholic and public schools in the region, including the Xavier Catholic School System in Cedar Rapids have postponed their start dates.

“While our Xavier Catholic Schools facilities have sustained some damage from the storm, we count our blessings that our primary issue is power and connectivity/internet access at this time,” states a letter from school leaders sent out to families Aug. 14.

“We have made the difficult decision to only place students living more than 15 miles from campus in campus housing for the fall semester,” said Nate Klein, vice president for student success, in a press release.

Other schools were more fortunate.

“There wasn’t damage to the school,” said Casey Kettmann, principal St. Joseph School in Marion. “We just got power back yesterday (Aug. 18). We have two families displaced for at least six months.”

A federal emergency declaration for Iowa was signed Aug. 17 in response to a request the state made for at least $4 billion in federal aid to deal with property and crop damage, according to the Cedar Rapids Gazette.

Catholic Charities of the Archdiocese of Dubuque has started a relief fund for those affected by the storm. For more information on the storm or to donate, ­visit: https://catholiccharitiesdubuque.org/derecho.

Cover image: A roof from a nearby structure sits in front of an apartment building in one of the counties affected by the derecho. Nine counties in the Archdiocese of Dubuque were among the places impacted by the severe storm that spanned about 700 miles. (Photo by Megan Stammeyer)

Week 24: Liturgy of the Eucharist: Collection 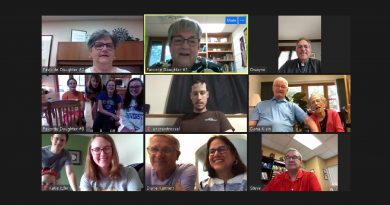