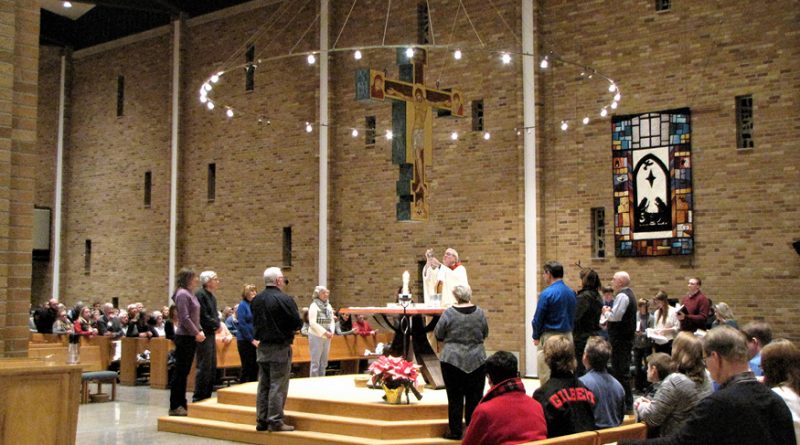 Church is enhanced with Byzantine style icon art over altar

By Joe Leisz
Special to The Witness

AMES — St. Thomas Aquinas Church and Catholic Student Center in Ames recently dedicated a new crucifix icon. The 7-foot-6-inch icon, suspended above the altar in the center of the church, is unique in that the same image appears on both sides of its front and back; keeping the worshipping community together in one body.

Created by iconographer Kathy Sievers of St. Elizabeth the Wonderworker Iconography Studio, the installation and dedication of this piece was celebrated with a dedication Mass with donors Phil Baumel and his family. It is dedicated in memory of Phil’s wife, Rita Baumel, and the family of Leo and Sue Peters, who donated the development and installation of this artwork.

The installation and dedication concluded a multi-year effort that gathered input from the parish and much thought and prayer about how to incorporate a crucifix in the main church, which was originally designed with the altar in the center and congregation equally divided on both sides of the altar in the 1960s.

Sievers shared additional information in a special presentation to the parish about the icon in January, noting that she hoped her vision for a crucifix that can be seen from a distance, centering the attention of parishioners upon Christ’s saving death and resurrection and on the Eucharist, and unifying the community, has been realized in this new addition to an ancient artistic tradition.

For the past 500 years, the crucifix has usually included Christ dead on the cross. However, the history of both the Eastern and Western churches contains examples from the 10th century onward of crucifixes with Christ gazing directly at the people. The practice was common in the middle ages. The design for the STA crucifix is not a risen Christ that shows Christ post-resurrection. This crucifix shows Christ just prior to his death. By his open gaze, we encounter the mystery of his suffering and saving death. We also are invited into relationship with him, as well as to contemplate him and what he means to us as the foundation and wellspring of our faith.

The crucifix consists of a single ­panel in the style of a Byzantine cross, with rectangles at the ends of the width and length. The rectangles at either end of the horizontal beam include icons of the Mother of God and St. John. Inscriptions are on the top rectangle. The rocky mountain with the cave and skull are found on the bottom rectangle, and angels are depicted within the sides of the icon.

The parishioners of St. Thomas Aquinas invite you to see this new addition to our church the next time you are in Ames.

Members of St. Thomas Aquinas Church and Catholic Student Center in Ames come together for the dedication Mass for the new crucifix that now hangs over the altar in the worship space. The installation of the piece of sacred art was many years in the making. (Contributed photo) 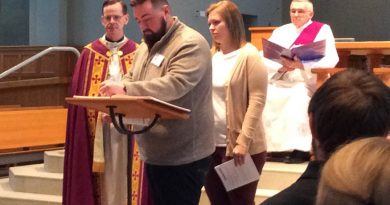 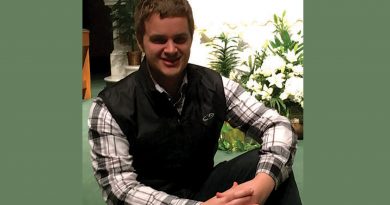