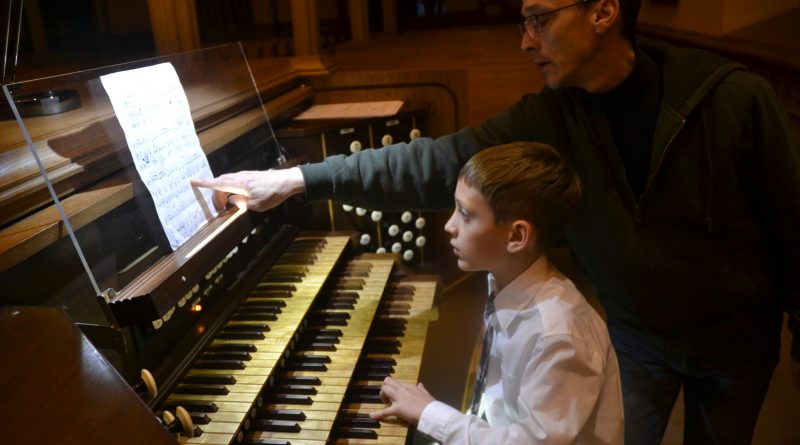 DUBUQUE — Sam Root takes a seat at least once a week behind a triple keyboard organ with numerous “stops” controlling the air blowing through over 2,800 pipes. His feet barely reach the pedal board, a fourth element that adds even more texture to the voluminous sound coming from the large instrument at the Cathedral of St. Raphael.

At his most recent lesson with Jim Mendralla, the liturgy and music director at the parish, he worked on perfecting “Oh Little Town of Bethlehem,” which he will play at Mass on Christmas Eve. Despite the daunting challenge of learning the organ, the 10-year-old is excited to take it on.

“I guess it’s a real privilege because I would say not a lot of people my age play this kind of thing,” said the student at Our Lady of Guadalupe School.  This is one of my few pieces I have to play two hands and the pedal board. Both hands are really complicated, and I can’t look at my feet. I have to look at the music.”

While pipe organs have been used to create worship music and accompany choirs for countless generations in Christian history, it is less common to hear them today than it once was. Nonetheless, there are young people like Root who are revitalizing this traditional instrument. Mendralla, who takes on students like Root, is hoping to play a role in nurturing new talent.

“When people tell me they ‘hate the organ,’ my first question to them always is: ‘Have you ever heard it played correctly by a trained organist?’” he reflected. “People in pews generally don’t know or understand the intricacies of the organ, but they do have a basic perception of when it is played by a trained organist and when it is not. Unfortunately, when it is not played correctly, it gives the organ a poor reputation. When it is played well, it is a joy to hear, absolutely thrilling.”

Jonathan Hill, a junior at Wahlert Catholic High School, played the piano since early childhood and is now investing time in learning how to play the organ well.

Just before notes soared to the high ceiling of the cathedral during a recent bit of practice, Hill explained some of the differences of organ vs. piano.

“On the piano especially, when you hit a note, it tends to resonate and carry a little bit more, but on the organ, when you take your hand off of the key, the sound stops immediately,” said the teenager.

Hill became interested after seeing an demonstration of the instrument at a music camp at Wartburg College before ninth grade. He was inspired by the music director at St. Joseph the Worker, his home parish, and has been involved in the ministry there. For the last several months, he has been studying with Mendralla, who also helped him secure a position as organist for St. John Episcopal Church, also in Dubuque.

“A lot of the music that is implemented in the worship services is in the modern style,” said Hill. (Studying the organ) has definitely given me a broader spectrum of the liturgical music that can be used.”

Hill is considering continuing his development in college and one day serving as a liturgist and music director himself.

“That’s something I have a drive for, have a passion for. I’ve loved doing it for a long time. It’s a gift I want to share with people,” he said.

Sitting down at an organ for the first time can be as intimidating as getting into the “cockpit of an airplane” for students, according to Mendralla, but once they master it, the instrument can create a sublime atmosphere for prayer and “endless possibilities” for making great music. Hill has experienced hints of this so far.

“If I can control it, it feels powerful, but that’s the thing we’re working up to,” he said. “Right now, it’s like I’m trying to tame a wild animal here.”

Root has been on his journey with the organ a little bit longer than Hill — about a year and a half. He became interested after watching Mendralla play one Sunday. Eventually the family left their normal weekly seats to a pew by the instrument.

“Samuel asked if we could move closer to the organ,” said Corey Root, Sam’s father. “His eyes were frequently on what Jim was doing.”

Sam’s parents invested in their son’s musical curiosity, first getting him ­piano lessons. After a few months, he began studying organ with Mendralla. The family eventually obtained an organ for their home through another family in the cathedral parish. Root now practices every day and has made a lot of progress.

Root has played at various Masses, including last Christmas Eve’s Mass. He is having fun so far, especially when he finishes a piece in front of an audience.

“We have this big party at my grandma’s house, and there was this lady I’d never seen before,” he recalled. “I was walking into the room, and she comes up and says, ‘Hey, aren’t you the kid who plays the organ?’ That was really inspiring.”

Both Root and Hill believe studying the organ has had an impact on their spiritual lives.

The role the organ can play in faith has been affirmed by the church: “The organ helps people perceive something of the splendor of our faith, — a splendor kindled by the Holy Spirit,” reads a section of “Sing to the Lord: Music in Divine Worship,” a document by the United States bishops. Hill has experienced the truth of this statement first hand.

“I think music has helped deepen (my faith) over time,” he said. “I think over the course of the past five or 10 years I’ve really strived to take my faith to a personal level to me rather than it be forced upon me by my parents or my school. I really wanted to make it my own  relationship with God.”

Cover photo: Sam Root practices on the organ at the Cathedral of St. Raphael with the assistance of teacher Jim Mendralla. (Witness photo by Dan Russo) 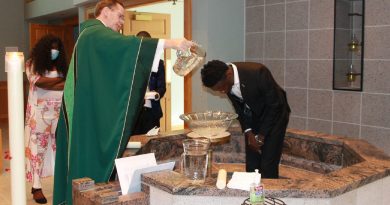