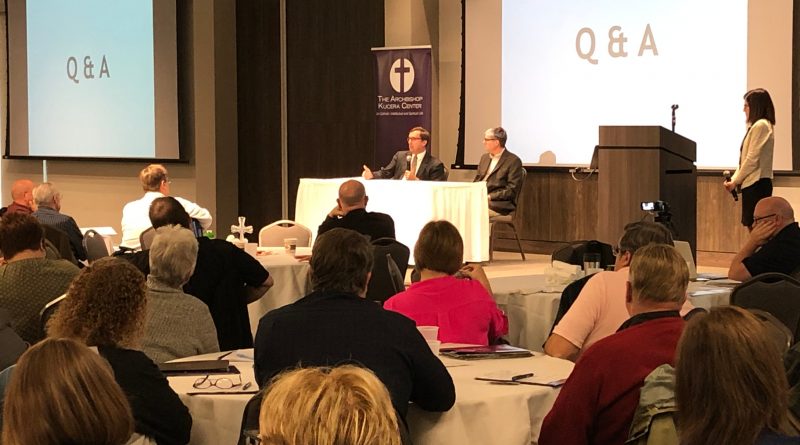 CEDAR FALLS — With political discourse in the United States becoming increasingly divisive,  clergy, religious and lay leaders of the archdiocese gathered recently at the Caraway Center in Cedar Falls to discuss Catholic Social Teaching at the fall Pastoral Leadership Study Day. The conference, titled “Catholic Social Teaching: A Pathway to Unity,” focused on Catholics’ duty to strive for justice in all aspects of life, including by participating in politics.

Archbishop Michael Jackels and Tom Chapman, executive director of the Iowa Catholic Conference (ICC), were the keynote speakers. The event also featured talks by other experts on various topics. Archbishop Jackels kicked off the day by giving an overview of the ideas at the foundation of church social teaching.

“First of all, we have a right to vote,” said the archbishop during his opening remarks. “We take it for granted here in the United States, but this is Catholic social teaching, so all peoples everywhere have a right to vote. We, here, celebrate this hard won right; sometimes secured at the price of life or limb.”

Catholics, he said, have a moral duty to participate by voting and in other ways, according to the tenants of the faith. When making decisions that affect public life, two principles of Catholic social teaching are regarded as being “cardinal or hinge”: the common good and respect for human life and dignity.

Acknowledging the reality of politicians and political parties, Archbishop Jackels said this is not where his hope resides, but rather in the power of people living out the Gospel to be positive agents of change in the world.

“My hope is in the likes of us and especially in the likes of this kind of gathering, all committed followers of Jesus, members of his Catholic Church,” he said. “So we do what we can in the small ways, big ways, whatever they may be to change the world — to make it different, to make it better, to lift the world up into the kingdom of God … .”

Tom Chapman explained the ICC’s mission to advocate for Iowa’s four Catholic bishops in the civic arena. He discussed the ways in which his organization attempts to apply the teachings of the church in a practical way by working with legislators, educators and others. He mentioned how part of his job is to make presentations at parishes and for other Catholic groups.

“The first thing I ask people to do is to put aside their partisan political identity and put on their identity as a member of the body of Christ,” he said. “I let them know that we’re going to talk about these important issues as Catholics first. We’re trying to fit our politics to match our faith and not the other way around.”

Iowa’s bishops do not get involved in supporting or opposing candidates for office, Chapman explained. The conference focuses on advocating for or against policies or legislation based on Catholic teaching, and this can sometimes lead to being involved in controversial matters, according to Chapman. The level of acrimony among political parties has been rising in recent years, he said.

“Right now we’re in kind of a bad spot,” said Chapman. “Certainly during my time at the capitol, Republicans and Democrats have been much less likely to work together. Bills that are sponsored by members of both parties are now very rare.”

Chapman cited church documents and Pope Francis as he discussed the effort to create a culture of encounter while advocating on specific issues.

“It’s not our job as church to run society,” he said. “Our job is to help people on their journey to heaven as best we can, but one aspect of that can be to help people flourish in the here and now. … Right now this fall we’re working on merciful immigration policies; we’re working on more support for parental choice in schools; and we’re actually working on a constitutional amendment regarding abortion to try to reverse our Iowa Supreme Court in a decision that they did last year which went way beyond Roe v. Wade and found a fundamental right to abortion in our (Iowa) Constitution.”

Dave Cochran, a professor of politics at Loras College and director of the Archbishop Kucera Center; Mark Schmidt, director of the Office of Respect Life and Social Justice for the archdiocese; and Yer Vang, director of Immigration Legal Services for Catholic Charities, also spoke during the study day. 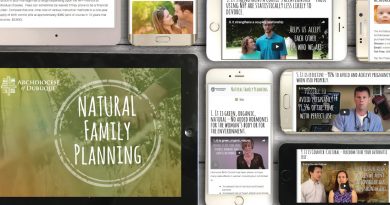 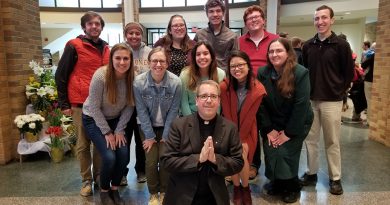