The firstborn from the dead

The judgment of the sheep and goats 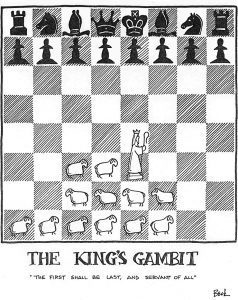 In the Bible, conventional notions of authority are transformed. This is captured in Matthew 20:25-27, as Jesus concludes his teaching on the way to Jerusalem: “You know that the rulers of the Gentiles lord it over them, and the great ones make their authority over them felt. But it shall not be so among you. Rather, whoever wishes to be great among you shall be your servant; whoever wishes to be first among you shall be your slave.”

The biblical notion of kingship is a prominent example of the transformation. Rather than endorsing (or “baptizing”) cultural ways of doing things, now in service of the kingdom, the notion of authority itself is converted instead.

Today the imagery favors that of the shepherd. This is not an innovation of the New Testament. Not only does it appear in ancient non-biblical documents, but it is a primary feature of the prophetic writers. Chapter 34 of Ezekiel is a primary example, and today’s first reading is taken from that. It captures the prophetic critique of kingship as the office of kingship was known then. The thrust of the criticism was that the role of kingship is intended to serve the people it leads, and not the person holding the position. The prophets work the shepherd image impressively to that effect. Micah even accuses the kings of being like the shepherd who slaughters, roasts and eats his sheep.

Ezekiel writes in that vein, and his prophecy is echoed in the writings of others, to the effect that God is the true shepherd. And God will bring judgment on those who abuse their entrusted position.

Ezekiel was a prophet during the Babylonian exile. At this point in time, the kingdom under the David family was passing from history, never to return. During their sojourn in Babylon, the exiles experienced a radical revision of their understanding of kingship. Second Isaiah’s image of the suffering servant emphasized the prophetic notion of authority. The New Testament would pick up on the Isaian theme in a big way, with Jesus teaching authority as service. Jesus takes the teaching all the way to the cross, deriving his own authority from there.

Today’s Gospel parable concludes the public life of Jesus. After this the Gospel turns to the Passion account. The parable of the sheep and goats pictures the king as judge, culling the herd. What is notable about this parable is the terms of judgment. While we are sometimes wary of the idea of judgment, thinking of it as constant monitoring of our actions vis-á-vis the laws and regulations, it is worth noting it is not the case with this parable.

A prominent feature of the story is the fact that those who do good, as well as those who do not, are completely unaware of the judgment. “When did we do this to you?” they ask. “As long as you did it to the least of these, you did it to me,” is the answer. So it would appear that they were not acting in conformity with some proscription, or at least not consciously.

But at the heart of the parable we find a paradox. The parable presents itself to us as a kind of warning. Those who did right without being aware received their just desserts. But now we know, so it is even more incumbent upon us to do the right thing.

For reflection: Why are these works of mercy?

Notice: Once again, a volume of homilies given at Mt. St. Francis in Cycle B, 2015, are available for those reflecting on the coming church year. Interested persons can contact Carol Oberfoell, religious studies secretary at Loras. Ph. 563-588-7662. Email: Carol.Oberfoell@loras.edu.

The Lord is kind and merciful

Incarnation – God is with us