Drama of a man born blind 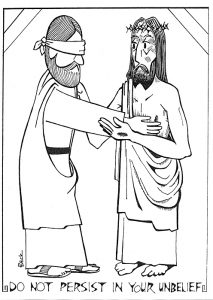 In these stories from John’s Gospel in the Sundays of Lent, we have been taking our cue from the words at the beginning: “And the Word became flesh, and ‘tabernacled’ among us” (John 1:14). This strange translation of “dwelt among us” is based on the verb used here, which is literally “tented among us.” While it re­minds us of camping, it probably is a reference to the tabernacle in the wilderness during the wandering of Israel, in the time of Moses.

With that as our cue, we can see Jesus “occupying” sacred places and times. In the first chapters, sacred places are featured—first the Temple in Jerusalem (John 2:12-22), and then the holy site of Jacob’s well (4:4-41). The latter was last week’s story of the Samaritan woman.

After the occupation of sacred sites comes the repurposing of sacred times. This Gospel, like the others, shows Jesus’ mastery of the Sabbath and the Pass­over. But the sacred time that gets the most attention is, of course, the Feast of Tabernacles. From Chapter 7 through part way of Chapter 10 Jesus is debating with his opponents in the Temple during the Feast of Tabernacles. This week’s Gospel reading takes place during this time.

Most of these chapters involve debate, though a couple of incidents also occur. One of these is the healing of a man born blind—today’s story.

As in other cases, this story is developed by John in a finely crafted drama. If we work it out by way of shift of characters, we might see seven scenes in Chapter 9:

Things to watch for:

The understanding of the man grows, as his responses move from “I do not know,” through “he is a prophet,” to “I do believe, Lord.” Meanwhile, as his descriptions of the healing grow shorter and more im­patient, his arguments become firmer and expressed at greater length. Sarcasm enters the picture as well.

On the other hand, the resistance of the Pharisees also increases. Notice how they are divided in opinion in the first interview with the blind man, but they are united in opposition when we come to the second interview. And this is without any additional information, since the parents wisely remained silent.

Unlike many dramas, this one does not resolve peacefully, since the opposition is stronger at the end than at the beginning. However, as a part of the larger narrative of John’s Gospel it builds toward the crisis that leads into the Passion. All during the debates in the Temple the tension has been increasing, and this is a part of that dynamic.

For reflection: The spiritual blindness of the man and that of the Pharisees cannot be the same. How would you describe them?

The understanding of health care as a human right

May all the people praise you