I shall behold your face 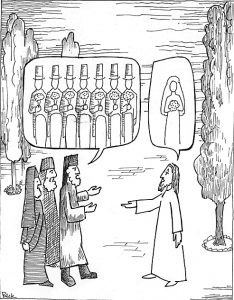 We are no longer on the road to Jerusalem, having arrived there. The Gospel selections turn to the debates during the final week of Jesus’ life. They are trying to trap him in his words. It will not work.

The pairing of the reading from 2 Maccabees with that of Luke is probably inevitable. What other biblical stories have seven brothers and resurrection as their theme, and on top of that provides the setting for a life-and-death test?

The story from 2 Maccabees is set during the turmoil in Judea that eventuates in the feast of Hanukkah. The world was changing. Hebrew was no longer spoken, replaced by Aramaic and Greek. Judea was a part of the Seleucid empire of Syria, which maintained a mild rule until the emperor Antiochus Epiphanes took the throne. He was an aggressive proponent of the Hellenist culture that developed in ancient Athens, and still shapes our own. Many Judeans felt their way of life and even their faith was threatened. Antiochus went so far as to attempt to convert the Jerusalem Temple to the worship of Zeus.

Judas, nicknamed “Maccabeus” (“the Hammer”), and his brothers led a revolt that shook Judea free. Afterward they were required to have the Temple dedicated again. That re-dedication is memorialized by the feast of Hanukkah.

Today’s account has elements of folklore in it. The picture of the emperor getting personally involved in events is a tipoff. He had other things to do. Also, whenever we have seven of anything, you can be sure that storytelling is involved. Sevenfold telling is typical of more leisurely cultures, but not ours. This is why we do not have all seven of the brothers paraded before us. It is hard to imagine that we would have the patience for it. Instead we are given excerpts that include the second, third and fourth of the brothers.

Although the Maccabees revolted against the influence of Greek culture, that influence continued to grow. Ironically, the books of Maccabees are themselves written in Greek.

And then there is the matter of belief in resurrection. The resurrection faith of the brothers made them impervious to the death threats against them. They were not afraid to die. However, resurrection faith was a new thing, not found in the Hebrew Bible. In a way, the Maccabees are pitting a new faith against a new threat. Notice that 2 Maccabees envisions a resurrection of the just only. In this, they are similar to Paul (1 Cor 15:50).

When we turn to the Gospel story, with its similar themes, we also find a tension between the old and the new. As we find in Acts 23:7-8, not all Jews believed in the new theme of resurrection. The ruling party of Jews, the Sadducees held to the old traditions, whereas the Pharisees favored the new. That is the background for the test of Jesus.

Note that the Sadducees are not only mocking the idea of resurrection, but they are also pitting against it their own doctrine of immortality. For them it comes through persistence of the family name. For Jesus, as for the Pharisees, it is personal resurrection. What seems to be referenced in the Sadducee argument is the ancient Levirate law, which held that the brother of a married man who died childless was obliged to marry his widow, with the firstborn being the legal heir of the dead brother (Deut 25:5- 10).

In 2 Maccabees, the old tradition is championed against the new. But in the Gospel, the new is argued against the old. And Jesus and his following are the new movement on the scene.

For reflection: Resurrection of the body is Jewish; immortality of the soul is Greek. So what do we believe in?

Suicide – Redeeming the Memory of a Loved One

Our ache for earthly immortality