My help is from the Lord

All Scripture is inspired by God 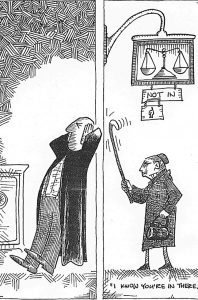 The fugitive Israelites, escaping slavery in Egypt, were not welcomed in the lands across which they traveled. The kings of those lands did not want them to give ideas to their own subjected people. Amalek, or the Amalekites, is the prototype of all the opposition that they encountered in their wanderings. It probably refers to settlements in the Negev, the southern desert between Israel and Sinai.

The story itself is colored by folklore. When Moses held up his arms in prayerful appeal, Israel prevailed in the field; when he didn’t, they faltered. So when he tired, Aaron and Hur supported his arms. The story is intended to dramatize the role that God had in their success and the fact that they were not able to continue on their own. Of course, to us it sounds rather mechanical. But it still makes its point.

Then there is the matter of Moses’ staff. The staff is first introduced in Exodus 4, where it becomes a snake, and then a staff, presented to Moses as a symbol of his authority. In Exodus 7, Moses throws it before the pharaoh, where again it turned into a snake, but without impressing the pharaoh. The staff is involved in the various plagues (Ex 8:5, 16; 9:23; 10:13). Moses uses the staff to separate the waters of the Reed Sea, so that the people may cross (Ex 14:16). The ancient editors who gathered the stories of the desert wanderings, and edited them into the sequence here in Exodus, also added Moses’s staff to the sequence of stories. It provides continuity to the series. But in some cases, like the present, is sits awkwardly with the action of the story. It would seem to offer adequate support, making the assistance of Aaron and Hur unnecessary. But that would ruin the story.

The story of Moses and Amalek illustrates the need for persistence in appealing to God for help. And that is the message of the Gospel parable as well. The poor widow who is bringing her case before the judge cannot afford his price, for he sells his verdicts to the highest bidder. This perversion of justice by the one to whom justice was entrusted was not unknown then, nor even today. It evokes the condemnations of Amos, who cried out against the corruption of the judges (Am 5:7-12).

The widow has one tool at her disposal, one means for achieving justice, and that is her persistence. There are some comic touches in the story, as the judge, “who neither feared God nor respected any human being,” begs to be delivered of this woman and even fears for his safety. “I shall deliver a just decision for her lest she finally come and strike me.” The lesson is not that God is like a corrupt judge. Rather it suggests that if even corrupt judges will respond to persistence, how more likely will a just God do so.

This is not the only persistent woman in the Gospels, for persistence comes into play in situations of imbalance of power. It no doubt reflects a situation that many women, and people of poverty, experienced, lacking any other means of persuading their opponents.

Why would a loving God not answer my prayers more quickly? But — how might that actually work out? It would not be to my advantage to have my every wish fulfilled. Think of the countless folk stories, from the Arabian Nights to the brothers Grimm, on the effect of having wishes fulfilled easily. It always works out badly.

And then there is the winnowing effect. I find out what is really important by what remains on my prayer list. Persistence points to my priorities.

For reflection: Prayer can be a process of discovery for me.

A case for priestly celibacy

Boredom – a fault within ourselves