The resplendence of wisdom

Those who remain will be caught up 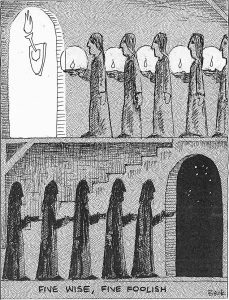 As we come to the end of the church year, we move into the season of apocalyptic readings in the lectionary. For this reason it is useful to reflect on the meaning of this kind of writing in New Testament times.

Scholars tell us that for first-century believers, Jesus included, apocalyptic visions were not so much a promise of the future as an alternative vision of the present. It was a vision drawing on Israel’s biblical ideals “to challenge the existing unjust social structures, not by the traditional means of a militant resistance, but by a new and creative interpretation of the kingdom of God.” Building upon that, some New Testament scholars distinguish among three utopian visions of that time—the triumphalist, the deferred and the revolutionary. “These are the triumphalism of imperial power regarded as the fulfillment of history; the deferred eschatology of those hoping for an eventual utopia, but who are prepared to accept the current status quo; and thirdly, the revolutionary expectation of an imminent and radical change” (Seán Freyne, “Jesus, A Galilean Jew,” 140, 29).

While the Roman Empire represented the triumphalist view of the fullness already arrived, the Pharisees can be said to represent the deferred view. Today Paul represents the third view expecting imminent and radical social change. He saw the “new creation” breaking into history, signaled by the resurrection of Jesus, “the firstborn from the dead,” surely the initial sign of the new age. In today’s readings, he reassures those in the church of Thessalonica who are worried that some of their members have died since Paul founded their community. They feared they would miss the coming of the new gathering. Paul assures them that they will not be omitted.

Matthew was writing when Jerusalem and its temple had been destroyed by the Roman army. His efforts were devoted to maintaining the social perspectives alternative to the status quo, despite the apparent victory of the Imperial Roman worldview. Anger and a thirst for revenge colored the world in which Matthew lived.

For him, the revelation of the new age is again deferred. But it still functions as an alternative vision, under the rubric of “wisdom.” Today’s first reading is an example of the image of wisdom as it appears in the Old Testament, pictured as a woman—perhaps in the sense that the (male) scholar was married to his books. We learn that she is sitting at the gate. In the ancient world, the gate was the place of community deliberation. If the old city of Jerusalem is to be our guide, inside the city gate is an open space that leads off into many streets. The gate area is one of the few open spaces in the city, where streets are narrow and crooked, more like walks and narrow alleys.

But in Matthew’s hands, wisdom is an alternative vision. Today’s Gospel—the parable of the ten bridesmaids, given at the end of Jesus’s public life, finds a partner in the parable of the two builders (Matt 7:24-27) that concludes the Sermon on the Mount. The sermon is the opening manifesto of Jesus’ ministry in this Gospel. It establishes the vision of nonviolence, love of enemies, trust in God for food, clothing and shelter. It is the alternative vision. The parable of the two builders affirms this as the wisdom of the house on rock, against the folly of the house on sand.

The parable of the ten bridesmaids also offers a choice. Read in the light of the Sermon on the Mount, it presents an image of vigilance during unpropitious times. Those who maintain the vision are those who keep their oil supplies current and their lamps trimmed.

For reflection: What is the character of our own vigilance?

Slavery in the 21st century

The cries of finitude