The Lord has revealed to the nations

God is love; let us love one another

My commandment: love one another 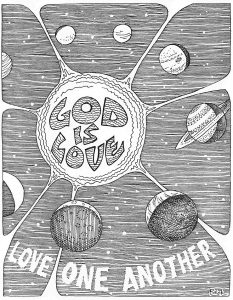 The Gospel reading for today along with the passage from 1 John are classic passages in the Christian collection. The first letter of John reminds us that love is of God. And Jesus, speaking to his disciples at the Last Supper, gives the commandment, “Love one another.” Then, as if to explain what that love is, he says, “Love one another as I love you.” And then, “No one has greater love than this, to lay down one’s life for one’s friends.”

In case we were thinking that “love” here refers to something soft and fuzzy, as we often use the word, we now stand corrected. This is that harsh and dreadful love that Dorothy Day used to talk about in the Catholic Worker. It is the absolute love of a parent for a child. It is the love that we heard about a couple of Sundays ago, when we learned that the Good Shepherd lays down his life for the sheep.

The first reading, from Acts 10, seems to be speaking out of a different world, unconnected to the other readings. And it is true that the first reading during Easter season is taken from Acts, rather than from the Old Testament as in other seasons. And most of those readings from Acts come from the earlier chapters. Seldom do we venture into the farther reaches of the book. Today we have a chance to do that.

We have only a snippet of Cornelius’ story selected for today. Some backstory might be helpful. With this episode we are introduced to a new term — God-fearing, applied to a Gentile, rather than a Jew. It appears in Acts 10:2, 22, 35. It will reappear in Acts 13:16, 26, where it finds another term used equivalently — “worshiper,” and in Acts 13:43, 50, again applied to Gentiles rather than Jews. Further examples of this can be found in Acts 16:14; 17:4, 17; 18:7. These terms were long used to describe a pious Jew, but this application to non-Jews is new.

Who are these “God-fearers”? A footnote in the New American Bible identifies the type as “one who accepted Jewish monotheism and ethic and attended the synagogue but did not consider himself bound by other regulations such as circumcision and observance of the dietary laws.” Why did these not convert to Judaism, even though attracted to its history and solemn tradition of fidelity to the one God? Many reasons are proposed, among them the dangers of the rite of circumcision for adults, in an age without antibiotics. But we can say that Luke’s God-fearers believe in God, love the Greek Bible used in the communities around the empire, and were supportive of the synagogues, often responsible for building and renovating them.

Furthermore, Luke’s double work, Luke-Acts, features a number of persons who seem to fit the description of God-fearer: In Luke 7:1-10 we meet a Roman centurion who is described in terms that suggest a God-fearer — something noticeable when we compare Matthew’s similar story in Matt 8:5-13. In Acts there is an Ethiopian eunuch (8:26-40), Lydia at Philippi (16:14-15) and Titus Justus of Corinth (18:7).

But the main example of the God-fearer is Cornelius. This story, with its elaborate description of the delegation to Peter, staying with Simon the Tanner, who lived by the sea, along with Peter’s grand vision of all the foods, now declared clean, is the main argument offered by Acts for the repeal of the food laws.

Another possible God-fearer is Theophilus, the person to whom Luke is writing (Luke 1:3; Acts 1:1). His name means “God lover.” And then there is Luke himself, traditionally a Gentile, and if so, then no doubt what he would call a God-fearer.

For reflection: Why would pagans be attracted to Judaism?