The tongue of the dumb will sing

The Lord gives sight to the blind 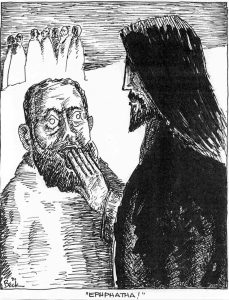 In the ordinary church year, a principle of selection holds that the Old Testament reading should have some connection with the Gospel reading for the day. This link can take many forms, from the most general topic to a specific quotation of a passage.

The key word is mogilalos, meaning “difficulty in speaking.” The common translation is “mute,” but more and more it is translated as “speech impediment.” The word appears only twice in the Bible, both in the readings of today — Isaiah 35:6 and Mark 7:32. From this we might conclude that Mark intended a connection between his story of the deaf-mute and this verse from Isaiah. At any rate, that is no doubt what the lectionary editors thought.

Where does this take us? It helps to realize that when the Bible makes reference to a passage in another biblical book, either by a quotation or by some other manner as today, it is not just being clever. It is not simply enhancing its style by using biblical language. It has a specific purpose in mind, and that is to link the two passages. It is a way of saying that the passage (in this case, from Mark) wants the reader to bring to bear upon it the earlier passage (from Isaiah, that is). It is an early form of footnote, before there were footnotes.

So what can it mean here? First of all, it expects you to be familiar with the passage that is quoted, as early readers of Mark and the New Testament were. For the 35th chapter of Isaiah, we have a complete poem. It is about rescuing the captives from exile. God delivers them, as if in a commando raid. First, he leaves Jerusalem for Babylon (Isa 35:1-6). Then he brings the captives back (35:7-10). In each move we have three themes — the travel (vv. 4, 8-9), the greening of a way through the desert (vv. 1-2, 7), and the renewal of the people (vv. 3, 5-6, 10).

The green path through the desert is imagined by the prophet as a version of the earlier Exodus, but this time to re-establish a people in their land (e.g. Isa 43:16-20). There will be a highway in the desert, a way of the Lord (Isa 40:3). In Mark, this prefigures, in its own way, the new moment in history that is announced by the Baptist (Mark 1:3).

With this in the background, we suspect that Mark is saying something about this healing of a deaf man with a serious speech impediment. Jesus is healing and restoring damaged lives in Galilee. But that is a sign of something more. A new age has arrived. The long-hoped-for renewal of God’s suffering, patient people has begun. A very similar story concerning blindness is given in the next chapter (8:22-26), using almost the same language and the same method of healing by spittle.

For reflection: Would you ever try to follow a quotation to see the connection?

Third Song of the Servant