A God of Justice

Hears the cry of the poor

Two went to the temple to pray 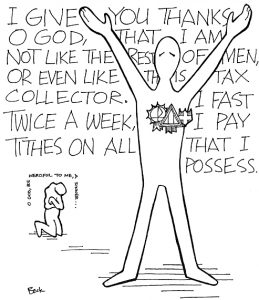 All summer and into the autumn we have been traveling with Jesus on the long road to Jerusalem, beginning at Luke 9:51. We are nearing the end of it.

Along the way, Jesus has been interacting with three groups of people. He instructs the disciples. He debates the Pharisees. He answers questions from the crowds. We can trace three strands through the account of the journey, as Jesus addresses each in turn, often with the others listening in. Today we come to the end of the debates.

These began at Luke 10:25-37, with the Lawyer’s question about the Great Commandment, and Jesus’ answer with the parable of the Good Samaritan. Along the way we have heard about places at table, eating with sinners, the meaning of wealth, all in the context of Jesus at odds with the defenders of the Jewish traditions and customs, many of which are codified in the Mosaic law.

Meanwhile, Luke has been presenting Jesus as one who favors repentance as the authentic route to favor with God. We are conscious of the fact that Luke is interested in showing how Jesus opens a way for the Gentile as well as the Jew. He will take that message farther in the Acts of the Apostles.

In the Gospel, Luke shows this dimension of his message by giving us a number of figures who illustrate repentance. His account of Peter’s call differs from the others, showing Peter in the boat, overwhelmed with the great catch of fish, and saying, “Depart from me, for I am a sinful man” (5:8). Others, appearing only in Luke, include the Prodigal Son (15:11-32), Zacchaeus the Tax Collector (19:1-10), and the Good Thief (23:39-43). And, of course, Paul, whose conversion is recounted three times in Acts (chs. 9, 22, and 26).

All of this comes together in today’s Gospel story, contrasting the Pharisee and the Tax Collector.

We tend to think of the Pharisee in the story as hypocritical, but the story doesn’t say that. He is not pretending to be something he isn’t. He is praying, and there is nobody to fool in prayer. He is thanking God for allowing him to do the various acts of virtue he lists. There may be some self-deception involved, but he is telling the truth.

A clue is in the introduction to the story. The parable is addressed to “some who were convinced of their own righteousness.” The line can be translated more literally as “some who trusted in themselves that they were righteous.” Righteousness here means right relationship with God. The issue is not about their hypocrisy, or their hidden unrighteousness, but rather their claim to authentic righteousness, about which they take credit. It is their taking credit that is the issue. It neglects the role of grace, God’s place in the matter. If a gap has opened between God and me, it is God who closes the gap, not me. My role is to be open to the possibility and respond appropriately.

So it is with the two in the parable. The Pharisee lists the things that God has allowed him to do. But he seems to be forgetting the part God plays in it. Perhaps he is overly impressed with his accomplishments, and they have distracted him from his essential frailty.

The Tax Collector, on the other hand, is in touch with his human vulnerability, perhaps because it has been reinforced by the public scorn he receives. But here he stands, at the end of the string of debates, representing repentance: “O God, be merciful to me a sinner.” In this, he sounds a lot like Peter, at the beginning of the Gospel.

Reflecting on media literacy for Catholics